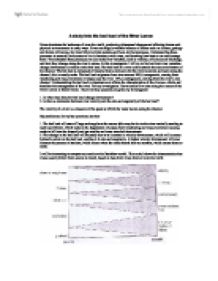 A study into the bed load of the River Lemon

A study into the bed load of the River Lemon Rivers dominate the landscape all over the world, producing widespread changes and affecting human and physical environments in many ways. Rivers are hugely variable because of factors such as climate, geology and human influences, but most follow similar patterns and have similar processes. Understanding these processes is essential for humans to live in harmony with rivers, and knowing how best to use and manage them. To understand these processes we can study river variables, such as velocity, efficiency and discharge, and how they change along the river's course. In this investigation I will try to find out how river variables change downstream in relation to the bed load. The bed load of a river is the material that sits at the bottom of the channel. The bed load is composed of material that is too heavy for the river to entrain and carry along the channel, this is mostly rocks. The bed load originates from two sources: 90% is exogenetic, coming from weathering and mass movement of slopes near the river. 10% is endogenetic, coming from the river's own channel. Understanding the bed load is important as it affects the characteristics of the river as a whole and therefore the management of the river. For my investigation I have studied five sites along the course of the River Lemon in South Devon. I have two key questions to guide my investigation: 1. In what ways does the bed load change downstream? 2. Is there a correlation between river velocity and the size and angularity of the bed load? The velocity of a river is a measure of the speed at which the water travels along the channel. My predictions for my key questions are that: 1. The bed load will start off large and angular at the source (this may be due to the river vertically eroding to reach equilibrium, which leads to the degradation of slopes from weathering and mass movement causing rocks to fall into the channel) ...read more.

Although, because there were only five pairs, the result was not very accurate, it was the same rs value for both correlations. In the future I could have used more data points and a trend might be clearer. The flowmeter was a good way to measure velocity, but at site one, the channel was so small that the flow could not be measured very accurately. If I were to redesign the project I would change certain aspects. I would sample the bedload by taking it out with a shovel, and find the median rock size, as I think this would be more representative of the overall trend at each site. I would use data from more sites on the river, maybe seven or eight. I would have the sites be equally spaced out along the river, the first site being at the source, and the last site being at the mouth. In my investigation, the last site was not very near the mouth of the river, and therefore does not show the extent to which the bedload changes. Overall I think my investigation has been only partially successful. I aimed to show that velocity increased downstream which reduces the size and angularity of the bedload. What I found was that the correlation between velocity and bedload was not as strong as I thought it would be. The bedload is an important aspect of the river as it affects both the velocity and efficiency of it. The river Lemon does have some problems with flooding, and these problems stem from Dartmoor, where there is a large bedload of hard granite. One possible way to reduce the flood risk is to dredge the channel of sediment, making it deeper and therefore having a larger carrying capacity to cope with flooding, and so reducing the flood risk to settlements downstream like Newton Abbot. Dredging makes rivers more efficient and is cheap, but requires regular maintenance and can have a negative impact on any species living there. Studying rivers is important for humans to understand them and live in harmony with them. ...read more.