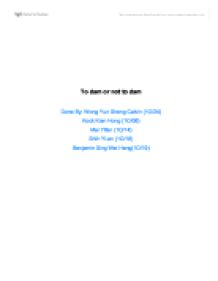 To dam or not to dam - the Yangtze.

To dam or not to dam Done By: Wong Yun Sheng Calvin (1O/24) Kock Kian Hong (1O/08) Mai Yifan (1O/14) Shih Yi-an (1O/18) Benjamin Sing Wei Heng(1O/19) A rough sketch of the Yangtze What is the purpose of building the dam of such proportion? (refer to Appendix A) This is to harness the energy of the Yangtze River. The resources for the production of energy from the Yangtze are enormous, although they have not been developed to a large extent. The total potential power is estimated to be more than 200 million kilowatts, representing about two-fifths of the total energy potential of all the rivers of China. The most ambitious project completed is the Ko-chou-pa hydroelectric dam above I-ch'ang, which is the first structure to block the flow of the Yangtze. The power potential in the vicinity of the Three Gorges is especially great, amounting to about one-fifth of the Yangtze's total potential. In the early 1990s preliminary work began on a massive dam and reservoir project there. Many tributaries of the Yangtze that have significant fall and volume-such as the Ya-lung, Min, and Chia-ling rivers-and other rivers that are tributaries of Lakes Tung-t'ing and P'o-yang also have considerable potential. Briefly describe the magnitude of the project Since construction began in 1993, almost 19.2 billion Yuan has been spent on it. 178 cubic metres of earth and stone have been removed over the past four years. ...read more.

By eliminating rapids, the dam will improve navigation on the Yangtze. By regulating the flow of the Yangtze, more water should be available for irrigation. Thousands of jobs will be created: builders, engineers, transport jobs, trade jobs, electricians, service jobs in towns, town planners etc. A short reflection on the issue The construction of the Three Gorges Dam has both advantages and disadvantages. As an advantage, the project will help to control the disastrous floods of the Yangtze. It will also produce enormous amounts of hydroelectric power for Central China and at the same time, reduce the amount of coal that is used to generate electric power, which would cause environmental pollution. It will also facilitate inland trade. However, the dam construction has also caused many disasters. It destroys many archaeological finds and China has lost cultural relics that are very valuable and meaningful for historians and archaeologists. Many fish species will not be able to survive in the river because the water temperature is now below 64 degrees Fahrenheit and water pollution has been increased. Also, it causes more than 1.2 million people to move away. Many of them also lose their property. However, the compensation that the people get is far less than what they have lost during the resettlement. There has also been an increasing amount of corruption because of this, with many officials pocketing money that was meant as compensation for the people. ...read more.

They can also improve inland trade by deepening the depth of a river. They can also provide a source of water for human consumption, irrigation or industrial purposes (e.g. Hoover Dam in Arizona). The lake behind the dam may also be transformed into a recreation area. Disadvantages: Serious consequences follow if a dam is overtopped. Disaster is likely in the case of an embankment dam not designed to permit uncontrolled flow of water on its downstream slope. In March 1960 the partially completed embankment dam at Oros, Brazil, was accidentally overtopped during a period of unexpectedly heavy rainfall. Despite heroic efforts to avert disaster, the water level rose nearly three feet above crest level, eroded about half the fill in the dam, and cut a deep breach about 660 feet wide in the structure. Although there was time to evacuate 100,000 people living downstream, half were subsequently rendered homeless and about 50 perished. Dams can also prevent fish from migrating, such as adult salmon when they move upstream, and young salmon from reaching feeding grounds. Sediment in rivers seriously influences the effective life of a reservoir and therefore the financing of a dam. Some modern dams have been rendered useless for storing water because the reservoir has filled with silt. Sources http://www.uoguelph.ca/~lrichard/yangtze.html http://www.freezone.co.uk http://probeinternational.org http://www.nationalgeographic.com iso.hirihina.com http://www.threegorgesprobe.com http://www.solidsoftware.com.au/Yangtze/Default.htm Megaproject: A Case Study of China's Three Gorges Project (1993), Shui-hung Luk and Joseph Whitney Damming the Three Gorges (1993), Margaret Barber and Gr�nnie Ryder A guide to the Yangtze river (1985), Judy Bonavia Exploring the Yangtze: China's longest river (1989), How Man Wong Through the Dragon's mouth (1999), Cowles, Ben Thomson ...read more.