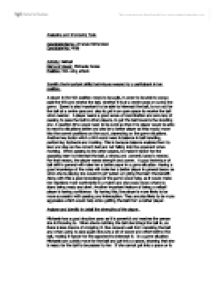 Analysing and Improving Task Candidate Name: Amanda Richardson Candidate No: 4168 Activity: Netball Name of player: Michaela Dukes Position: WA- wing attack Identify the important skills/ techniques needed for a participant in her position. A player in the WA position needs to be agile, in order to be able to dodge past the WD and receive the ball, whether it is at a centre pass or during the game. Speed is also important to be able to intercept the ball, to run out for the ball at a centre pass and also to get in an open space to receive the ball when needed. A player needs a good sense of coordination and accuracy of passing to pass the ball to other players, to get the ball towards the shooting end. A reaction time would need to be quick as then the player would be able to react to situations better and also be a better player as they would move into the correct positions on the court, depending on the game situations. Another key factor which a WA would need is balance in ball handling, performing footwork and marking. ...read more.

Michaela has a good shoulder pass as it is powerful and reaches the person she is throwing to. When she is catching the ball she brings the ball in, so there is less chance of dropping it. She recovers well from receiving the ball and when going to pass again she puts a lot of power and effort behind the ball, making it harder for the opponent to intercept it. In a game situation Michaela can quickly move for the ball and get into a space, showing that she is ready for the ball to be passed to her. If she cannot get into a space or is being marked by her opponent, she can dodge past and receive when necessary. She has a good knowledge of most of the rules as she knows what parts of the netball court to go in and what parts she cannot. At a centre pass she is aware and can speedily run out for the ball and receive. Analyse and identify in detail the weaknesses of the player In a game situation Michaela does not always mark her opponent, as she does not always stay with her, when the opponent has the ball. ...read more.

She would then have to jump up for the ball when the over player passes it. She would then hopefully catch it. To help her intercept the ball she could do a training method which involves three people. Set up like this. To do this player 1 feeds to player 2 and then runs diagonal to intercept the ball from player 3. To improve her footwork Michaela could take part in the 'England practice'. This involves quite a few players who should be set up like this: The feeder passes the ball to one of the outside player, they would then pass the ball back to the feeder and run to a space in the middle and receive the ball again. AS the player is in motion whilst catching the ball the player is able t practice her footwork and correct it. They then pass the ball to the next person. To help with he confidence and ability to read the game, she should practice being in a game, se will the be able to get used to the flow and movement of the other netball players, helping her predict where the ball is going to go to next, therefore she can be in the correct place and to help her team. ...read more.