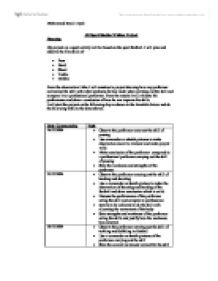 to get the head down over the ball Dribbling Dribbling flicks and tricks in football or soccer are fun to do, and great for getting past defenders, creating space. Dribbling skill can be used for running and beating defenders, and creating space to shoot or pass the ball. Technical Model for Dribbling * Receive and pass the ball * Dribble ball with inside of foot and outside * one or two touches or may mean using more touches and bursting into spaces when appropriate Performer County Player * He did not try receive ball from other players * The player was anxious to get rid of the ball, using large touches with ball being few meters away from his feet and did not try to confuse the players. * He kept patient with the ball making small touches using different surfaces of the foot such as inside then outside repeating the following moves to distract the player. * He kept looking towards the ball to make sure it was not rolling away. * He kept this head up and tried not to look down towards the ball. Point scored for skills After observing my player I have come to a conclusion that comparing my performer to the technical models I can score my player of what actions he took to achieve the skill. I have given points out of four because there are four main points in the technical mode. So evaluating the observation I produced the following results shown below Skill Points awarded out of four Shooting 3 Heading 2 Tackling 3 Dribbling 1 Heading 2 Bar Chart Strengths and Weakness of Performer Shooting As the performer carried out the skill of shooting I observed him several times while he took shots at the goals to score pass the goalkeeper. ...read more.

as camcorders and other students and teachers which can observe him and record him carry out the skill and teach were he is going wrong. Also the performer has access to professional performer which can help do tasks as going around cones and teach activities he can do to improve. Most of the equipment my performer needs he has access to it through his college. If my player wants to consider improving in dribbling he needs to take some steps such as his body position when he has possession of the ball. I have realised that when he has the ball he keeps the ball away from distance of 70-80 meters which means other player can get access to it very effortlessly. Also my performer should consider trying and using the outside and inside of foot when he is dribbling the ball and should try not getting nervous. My performer has minor problems with other skills but if he wants to be a better player he needs to take on other player and get to the other side and the score. For the performer to do this he needs to improve on dribbling. I haven chosen dribbling as a skill for my performer to improve on because after evaluating the tables and observing him I came to a conclusion that if he improves on dribbling as it is a weakness he will be able to participate in the game more and bring advantage it his team has he would have a wider area of skill in football. Also I have realised that for my performer to improve on dribbling want be a problem as he has access to all facilities I have mentioned and have improvement it would benefit him. ...read more.