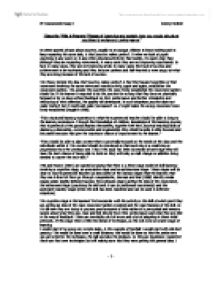 "Describe "Fitts & Posners" Phases of Learning and explain how you would structure practices to enhance a performance" An often-quoted phrase about practice, usually to encourage children to keep working and to keep repeating the same task, is that 'practice makes perfect'. It when we look at pupils practicing in any sport, or in any other physical activity for that matter, it is quite clear that, although they are repeating movements, in many cases they are not improving significantly. In fact, in many cases, they are not improving at all. In many cases their lack of success and achievement is de-motivating and they become careless and half-hearted or even angry at what they are doing because of the lack of success. The theory behind the idea that 'practice makes perfect' is that the frequent repetition of that movement involving the same nerve and muscle activity, again and again, establishes the movement pattern. The greater the repetition the more firmly established the movement pattern should be. If the learner is required to do the practice for so long that they become physically fatigued or for so long without feedback on their performance and further stimulation and refocusing of their attention, the quality will deteriorate. In such situations practice does not make 'perfect' but it might well make 'permanent' i.e. it might make the wrong movement more firmly established (Hogarth 1998). ...read more.

In terms of swimming this can be getting the performer to do the arm and leg/kicking action together. Once they had developed this I could think about incorporating the breathing into this. As they are still learning to put their own technique together, I would not use negative feedback still, but I would use constructive criticism, to make sure they know that they can still improve but I would do a lot of this. I think the best way to get feedback at this level would be intrinsic. By getting the feedback from the performer themselves, it is meaning that they have to think about their own performance and what was good and bad. By the autonomous stage the performance is almost automatic. The learner will not have to pay a great deal of attention to the perceptual and sensory feedback and the skill will remain consistent. In sprinting situations this frees them to focus their attention on other aspects such as bringing their knees up higher, using their arms, increasing the speed or pacing the race. As an automatic response to their relevant stimuli's, their technique should be of a high standard and are able to carry out the skill to a high standard in many different situations. As it's likely that they perform the skill correctly every time, little feedback may need to be given, instead of feedback, as such, as a coach you should ask how it felt and gather information this way. ...read more.

If the skill is taught for too long the performer will lose interest and may not wish to learn the skill correctly and therefore will not be able to move on. Like in gymnastics, if the performer is taught how to do the movement for too long, then it's more then likely that they will lose interest in the routine and if made to perform it, will not be of a high standard. The coach has to learn the tedium threshold of the performer and make sure this is not reached. If the correct feedback is not used then the performer can get confused about what they should be doing and not be able to complete a certain component of the skill and therefore will not be able to complete the overall skill, meaning they can't move on, e.g. the serve and volley in tennis. They may be able to complete the serve component, they then may be able to drive towards the net and get in the position to volley and they may be able to volley well when at the net, but they may be taught wrongly how to do it all together. And so they always lose the point on passing shots etc. so if they are not given the correct feedback about where it's going wrong then they will never be able to improve that overall skill and will be a lesser player because of it. ...read more.