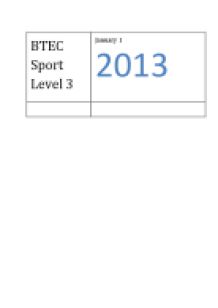 ﻿BTEC Sport Level 3 January 1 2013 ________________ Football There are various individual skills and team tactics needed to play football. Formations Formations in football are a method of positioning players on the pitch to allow a team to play according to their pre-set tactics. Different formations can be used depending on whether a team wishes to play more attacking or defensive football. Usually if the team has the ball more in a game and they have already scored more than once they just keep the ball and not risk taking passes that will give the ball away. Formations can be altered during a game, but this requires adaptation by the players to fit in to the new system. Formations count the number of players in each area, beginning with the defensive line (not including the goalkeeper). It is by convention counted when the team is defending and being properly organised. The most common formations are variations of 4-4-2, 4-3-3. Substitutions In competitive 11-a-side matches, teams are allowed to bring on up to three substitutes. The rules of the competition must state the maximum number of players allowed to be named as a substitute, which may be anywhere between three and seven. In non-competitive matches, the use of substitutes must be determined before the match begins, except in friendly international matches, where no more than six substitutes may be brought on. The most tired players are generally substituted, but only if their substitutes are well trained to fill in the same role, or if the formation is transformed at the same time to accommodate for the substitution. Coaches often refrain from substituting defensive players in order not to disrupt the defensive posture of the team. Instead, they often replace ineffective attackers or unimaginative midfielders in order to freshen up the attacking posture and increase their chances of scoring. For a team that is losing a game, a fresh striker can bring more benefit in penetrating the opposition?s defensive line which is composed of relatively tired players. ...read more.

The ball must stay within the court; the last team to touch the ball before it travels out of bounds forfeits possession. The ball is out of bounds if it touches or crosses over a boundary line, or touches a player who is out of bounds. This is in contrast to other sports such as football, volleyball, and tennis (but not rugby or American football) where the ball (or player) is still considered in if any part of it is touching a boundary line. The ball-handler may not step with both feet without dribbling, an infraction known as traveling, nor dribble with both hands or hold the ball and resume dribbling, a violation called double dribbling. Any part of the player's hand cannot be directly under the ball while dribbling; doing so is known as carrying the ball. A team, once having established ball control in the front half of their court, may not return the ball to the backcourt and be the first to touch it. The ball may not be kicked, nor be struck with the fist. A violation of these rules results in loss of possession, or, if committed by the defence, a reset of the shot clock (with some exceptions in the NBA). There are limits imposed on the time taken before progressing the ball past halfway (8 seconds in FIBA and the NBA), before attempting a shot (24 seconds in FIBA and the NBA), holding the ball while closely guarded (5 seconds), and remaining in the restricted area known as the free-throw lane, (or the "key") (3 seconds). These rules are designed to promote more offense. No player may touch the ball on its downward trajectory to the basket, unless it is obvious that the ball has no chance of entering the basket (goaltending). In addition, no player may touch the ball while it is on or in the basket; when any part of the ball is in the spacious cylinder above the basket (the area extended upwards from the basket); or when the ball is outside the cylinder, if the player reaches through the basket and touches it. ...read more.

Good dribblers (or "ball handlers") tend to bounce the ball low to the ground, reducing the distance of travel of the ball from the floor to the hand, making it more difficult for the defender to "steal" the ball. Good ball handlers frequently dribble behind their backs, between their legs, and switch directions suddenly, making a less predictable dribbling pattern that is more difficult to defend against. This is called a crossover, which is the most effective way to move past defenders while dribbling. A skilled player can dribble without watching the ball, using the dribbling motion or peripheral vision to keep track of the ball's location. By not having to focus on the ball, a player can look for teammates or scoring opportunities, as well as avoid the danger of having someone steal the ball away from him/her. Blocking A block is performed when, after a shot is attempted, a defender succeeds in altering the shot by touching the ball. In almost all variants of play, it is illegal to touch the ball after it is in the downward path of its arc; this is known as goaltending. It is also illegal to block a shot after it has touched the backboard, or when any part of the ball is directly above the rim. Under international rules it is illegal to block a shot that is in the downward path of its arc or one that has touched the backboard until the ball has hit the rim. After the ball hits the rim, it is again legal to touch it even though it is no longer considered as a block performed. To block a shot, a player has to be able to reach a point higher than where the shot is released. Thus, height can be an advantage in blocking. Players who are taller and playing the power forward or center positions generally record more blocks than players who are shorter and playing the guard positions. However, with good timing and a sufficiently high vertical leap, even shorter players can be effective shot blockers. ...read more.