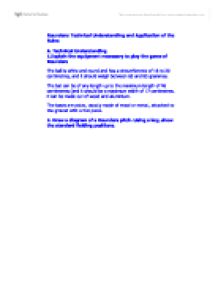 Rounders: Technical Understanding and Application of the Rules.

Rounders: Technical Understanding and Application of the Rules A. Technical Understanding 1.Explain the equipment necessary to play the game of Rounders The ball is white and round and has a circumference of 18 to 20 centimetres, and it should weigh between 65 and 85 grammes. The bat can be of any length up to the maximum length of 46 centimetres (and it should be a maximum width of 17 centimetres. it can be made out of wood and aluminium. The bases are poles, usually made of wood or metal, attached to the ground with a flat plate. 2. Draw a diagram of a Rounders pitch. Using a key, show the standard fielding positions. 3. When batting, describe how to perform the basic action. Arm should be swung back from the shoulder with the elbow lifted away from the body. Hit the ball by quickly straightening the elbow with a strong swift flick and a turn of the hand so the knuckles are facing the ground. ...read more.

The responsibilities each player would have (iii) The desired out come When only two batters remain, one rather stronger than the other, team may decide to avoid putting out the weakest of the pair. If the weakest of the pair can only reach first post there is a good chance of putting both batters out by placing the ball in the batting square, the more dangerous batter thus preventing from referring to "best of 3". B. Application of Rules 1. Draw a diagram of the pitch. Name four different pitch markings. 2. Explain how a rounder/ half rounder can be scored. A rounder can be scored: * A rounder can be scored from any one hit, whether the batter gets around the posts in one go or not. * If a player hits the ball and runs around all four posts before the posts have been touched with the ball, or the bowler has got the ball back. ...read more.

6. In an innings when one batter remains in, explain the procedure for the innings to continue. When there is only one player left in they have a choice of three "good b***s". They must run on the 3rd ball. If they do not hit the ball the backstop dubs him out by putting the ball in the batting square. If they score a rounder they can rest for 3 minutes and then have a choice of three "good b***s" again. 7. Name three responsibilities for: (a) The batter's umpire (b) The bowler's umpire (a) * Calls 'no-b***s'. * Calls 'out' for batters running into 1st and 4th posts that have been stumped. * Watches for catches and calls 'out' if the ball is held. * Calls 'rounder' when batter touches 4th post, or 'no score' if batter completed (b) * Calls 'play' to begin the game. * Calls 'no-ball'. * Gives decisions at 2nd and 3rd posts for in/out, obstructions and watches for batters running inside the posts. * Calls 'no-ball' if bowler steps over back or side lines during bowling action. ...read more.