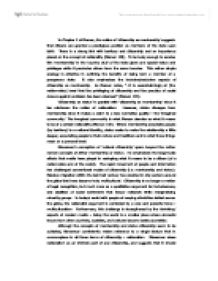 In Chapter 5 of Pierson, the notion of 'citizenship as membership' suggests that citizens are granted a prestigious position as members of the state upon birth. There is a strong link with territory and citizenship and an importance placed on the concept of nationality (Pierson 128). To be lucky enough to receive this 'membership' in the 'country club' of the state gives one special status and privileges while it precludes others from the same luxuries. This rather simple analogy is effective in outlining the benefits of being born a member of a prosperous state. It also emphasizes the inclusive/exclusive aspects of citizenship as membership. As Pierson notes, "...it is overwhelmingly at [the nation-state] level that the privileging of citizenship and the practice of social closure against outsiders has been observed" (Pierson 130). 'Citizenship as status' is parallel with 'citizenship as membership' since it too reinforces the notion of nationalism. However, status diverges from membership since it makes a claim to a less normative quality - the 'imagined community.' ...read more.

A feature that Parekh conceptualizes in the cultural framework includes, "...institutionally embedded multicultural practices rather than assimilation or mere tolerance" (Stevenson 72). It is evident that there is a fine line between granting too much to multicultural enhancement and risking national traditions, and reinforcing nationalism to the point where multicultural views are not given enough attention. As Stevenson puts it: "...we should be careful to avoid a false universalism that simply gestures towards the equality of the globe's cultures and avoid a form of cosmopolitan optimism that assumes that national cultures do not remain important centers of power and identity" (Stevenson 73). Overall, the concept of cultural citizenship seeks to embody nationalism (as in the membership and status conceptions) while advocating pluralism in a global society that unites so many unique cultural qualities. In relation to The Swedish Government's EU Policy Goals for 2002, three primary relationships can be conceived. The first resemblance is in the overall nature of both cultural citizenship and the EU Policy Document. ...read more.

express a similar sentiment to the pluralistic attributes of cultural citizenship. Furthermore, the pluralistic conception of the EU Policy Document is conveyed in the section on 'The future direction of the EU must be subject to open and broad debate.' Here, the document expresses the need for intergovernmental conferences to, "...be composed of representatives of Member State governments, national parliaments, the European Parliament and the Commission" (Swedish Government 11). The range of groups that the document prescribes to be involved in intergovernmental talks is in line with the pluralistic conception of cultural citizenship and the need for deliberation to find common, unified interests. The final relationship is most clearly defined as a mutual goal of retaining national interests. As it has been made clear, cultural citizenship, although focused on pluralism, reserves the importance of nationalism. Likewise, the Swedish EU Policy Document, although centered on integration with European goals, also realizes the importance of retaining national interests, and safeguarding against the compromising of these interests. This is evident through the advocating of a need, "...for national reflection" (Swedish Government 11) before policies are put into motion through intergovernmental action. ...read more.