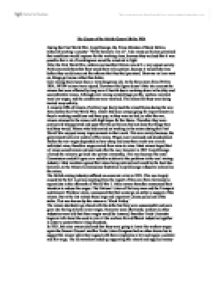 The Causes of the British General Strike 1926.

The Causes of the British General Strike 1926 During the First World War, Lloyd George, the Prime Minister of Great Britain, talked of creating a country "fit for heroes to live in". Also many politicians promised that conditions would improve for the working class, because they realised that it was possible that a lot of workingmen would be reluctant to fight. After the First World War, soldiers realised that Britain was still a very unjust society. Politicians told them that they would have to be patient, because it would take time before they could carry out the reforms that they had promised. However as time went on, things got worse rather than better. Coal mining had always been a very dangerous job. In the three years from 1922 to 1924, 597194 miners were injured. However this figure doesn't take into account the miners that were affected by long term ill health due to working down in the dirty and uncomfortable mines. Although coal mining created huge profits, workers received very low wages, and the conditions were very bad. The miners felt they were being treated very unfairly. ...read more.

The miners decided to go ahead with the strike but they were unsuccessful and soon gave into having to have lower wages. However soon afterwards, workers in other industries were told that there wages would be lowered, therefore Trade Unionists began to talk about the need to join all the workers from different industries together in order to protect there living standards. In 1925, the mine owners declared that they were going to lower the workers wages again the General Council and the Trade Union Congress had no other choice but to support the miners while they argued with there employers to try and regain a suitable and fair wage. The Government ended up supporting the miners and supplied money to bring the miners wages back to their previous level. This was seen as a victory for the working class, and soon became known as 'Red Friday'. The government soon said that the money they gave towards the miner's wages, would only last nine months, so therefore the Government decided to set up another Royal Commission, which would help to resolve all the problems with the mining industry. ...read more.

Prime Minister, stopped all of the negotiations, as the printers at the 'Daily Mail' newspaper had refused to print an article which was against the proposed General Strike. The Trade Union Council tried to apologise for the newspapers actions, but Baldwin stopped the talks and the General Strike began the next day. In conclusion I feel that the end of World War One was the most important cause leading up to the General Strike. I believe all of the causes were important, however I think that during World War One a lot of people had new jobs that they hadn't had before, but when the war was over a lot of these jobs were not needed anymore and a lot of people lost jobs and lost money. I think that the main long term causes of the General Strike were the reduction of the miner's wages and the Transport and General Workers Union being set up. Wage reductions probably reduced the total morale of all the workers and may have caused them to feel bitter towards the people they worked for. Transport and General Workers Union was a well-established union who were powerful enough to openly stand up against the government. ...read more.