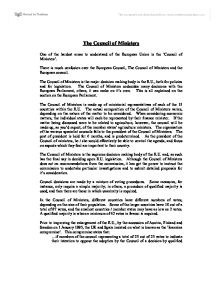 The Council of Ministers

The Council of Ministers is the supreme decision making body of the E.U. and, as such has the final say in deciding upon E.U. legislation. Although the Council of Ministers does act on recommendations from the commission, it has got the power to instruct the commission to undertake particular investigations and to submit detailed proposals for it's consideration. Council decisions are made by a mixture of voting procedures. Some measures, for instance, only require a simple majority; in others; a procedure of qualified majority is used; and then there are those in which unanimity is required. In the Council of Ministers, different countries have different numbers of votes, depending on the size of their population. ...read more.

to oppose the adoption by the Council of a decision by qualified majority, the Council will do all in it's power to reach within a reasonable time and without prejudicing obligatory time limits laid down in the treaties and by secondary law, such as articles 189B and 189Cof the Treaty establishing the European Community, a satisfactory solution that could be adopted by at least 65 votes. The effect of this compromise is a matter of some doubt, especially as the commission would subsequently call for a vote on the new basis as son as it felt that a reasonable time had elapsed. The European Council and the Council of the European Commission are identical, as they had simply changed their name to the latter. However, they differ greatly from the Council of Ministers. ...read more.