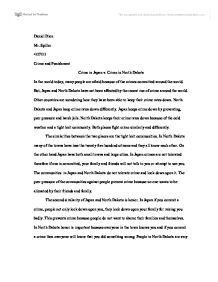 Daniel Dion Mr. Spiller 4/17/11 Crime and Punishment Crime in Japan v. Crime in North Dakota In the world today, many people are afraid because of the crimes committed around the world. But, Japan and North Dakota have not been affected by the recent rise of crime around the world. Other countries are wondering how they have been able to keep their crime rates down. North Dakota and Japan keep crime rates down differently. Japan keeps crime down by preventing, peer pressure and harsh jails. North Dakota keeps their crime rates down because of the cold weather and a tight knit community. Both places fight crime similarly and differently. The similarities between the two places are the tight knit communities. In North Dakota many of the towns have less the twenty five hundred citizens and they all know each other. On the other hand Japan have both small towns and large cities. ...read more.

As an other example a man in North Dakota works two jobs as a gas station attendant and a postmaster, he trusts the people of his town so much that he leaves the keys of the pumps for people to pay for gas and leave. This is why the two places have low crime rates because people trust each other and respect people belongings. These two places both have a low crime rate but they both achieve through different methods. North Dakota believes that since their state is so cold all the time, that people don't want to go outside during the long cold winters to cause trouble. At times during the winter, the temperature drops to forty below zero, many citizens just want to stay home and be warm. They believe cold weather does the trick because statistics show that in hotter states there have been more instances of murder, robbery and r**e. ...read more.

In 1993 the United States reported that 16,189 people were killed by firearms and on the other hand Japan had only reported 38 kills by a firearm. Japan is effective by keeping their crime rate down because the government is very strict about fire arms and to obtain a permit for a weapon is extremely hard. In the United States reported that they have over 200 millions gun registered, while on the other hand the Japanese only have 425,000 registered weapons in the entire country. Japan keeps crime down by preventing and being tough on crime, while the United States is lenient with convicted felons. There are many differences in the way Japan and North Dakota keep their crime rates down but in the end both of their averages are down. The Japanese take more steps to prevent crime while North Dakota relies on trust and cold weather to keep crime rates. But in the end the methods by both parties are effective because people can feel safe when traveling to Japan or North Dakota unlike places in the world and around in other states. ...read more.