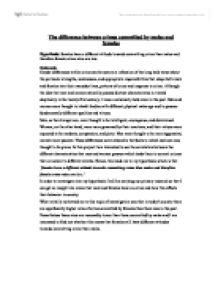 crimes committed by males and females

The difference between crimes committed by males and females Hypothesis: females have a different attitude towards committing crime than males and therefore female crime rates are low. Rationale: Gender differences within crime can be seen as a reflection of the long held views about the particular strengths, weaknesses, and appropriate responsibilities that shape both male and females into their everyday lives, patterns of crime and response to crime. Although the idea that men and women naturally possess distinct characteristics is treated skeptically in the twenty-first century, it was a universally held view in the past. Men and women were thought to inhabit bodies with different physical make-ups and to possess fundamentally different qualities and virtues. Men, as the stronger s*x, were thought to be intelligent, courageous, and determined. Women, on the other hand, were more governed by their emotions, and their virtues were expected to be modesty, compassion, and piety. Men were thought to be more aggressive; women more passive. These differences were echoed in the faults to which each s*x was thought to be prone. In this project I am interested to see the correlation between the different characteristics that men and women possess which leads them to commit crimes that are severe to different extents. ...read more.

In contrary attitudes of males towards committing crime can be seen differently. For example the sociologist Messerschmidt (1993) argues that there exists a 'normative masculinity' in society that is highly valued by most men. Normative masculinity refers to the socially approved idea of what a 'real male' is. He suggests that masculinity is not something natural but rather a state that males only achieve as an accomplishment', which involves being constantly worked at. Construction of masculinity however takes place in different contexts. For example businessmen express their power over women through their control in the workplace. Similarly men who are less powerful in the workplace express their power at home through exerting violence at home. Consequently it can be seen that, it is achieving masculinity that leads some men to commit crime, in particular crime is committed by those less powerful in an attempt to be successful at masculinity. The desire of young males to gain the status of being 'masculine' exists within education. In Paul Willis's study of the 'Lads' he discovered that many of the working class boys rejected school values and education because they knew they were destined for factory jobs and were happy with this. As a result they reverted to delinquent and often criminal behaviour in order to gain some kind of status. ...read more.

The sixth form I attend is very multicultural so I will try to keep a look out for any particular patterns there may be, for example a particular view may be common within certain ethnicity. When carrying out the interviews I will ensure that I do not use any leading questions or influence the participant's replies in any way. I have considered the possibility that some questions may involve the respondents having to look back in the past (e.g. childhood and how they were brought up) which may cause some of the responses to be unreliable as it depends on the respondents memory. Nevertheless it is unlikely that the respondents will lie or make up any answers because I will not be a stranger to them. I have decided to carry out the interviews during my free periods, with people that are free at the same time, which makes my sample random. Before carrying out the interview I prepared a set of questions that I will ask all participants, among the set of questions were a few closed questions I was going to use. The reason for using closed questions was that it will give me a chance to ask questions that are based on set scenarios and to see which of the multiple choice answers they would choose. ...read more.