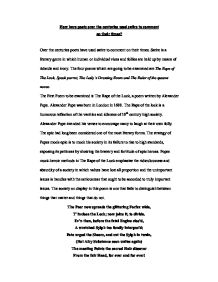 How have poets over the centuries used satire to comment on their times?

How have poets over the centuries used satire to comment on their times? Over the centuries poets have used satire to comment on their times. Satire is a literary genre in which human or individual vices and follies are held up by means of ridicule and irony. The four poems which are going to be examined are The r**e of The Lock, Speak parrot, The Lady's Dressing Room and The Ruler of the queens navee. The First Poem to be examined is The r**e of the Lock, a poem written by Alexander Pope. Alexander Pope was born in London in 1688. The r**e of the lock is a humorous reflection of the vanities and idleness of 18th century high society. Alexander Pope intended his verses to encourage many to laugh at their own folly. The epic had long been considered one of the most literary forms. The strategy of Popes mock-epic is to mock his society in its failure to rise to high standards, exposing its pettiness by showing the bravery and fortitude of epic heroes. ...read more.

Through clever wit, satire and sarcasm, Swift points out the problems with unrealistic expectations in his poem. "Paste of Composition rare," "Ointments good for scabby Chops," Within the poem, Swift's satirical target is Celia who serves for a metaphor for women, their vanity, and their charm and beauty which is ultimately a total fa�ade. In this case, given the grotesque misrepresentation of every woman Celia, Swift is clearly a hater if women. "Five Hours, (and who can do it less in? By Haughty Celia spent in Dressing: The Goddess From her chamber issues Array'd in Lace, Brocades and Tissues" This is a very sarcastic verse. "Five Hours, (and who can do it less in?". This is meant to be rhetorical. It is as if he is waiting for a reply, yet knows he will not get one. The rhyme is humorous and sounds like a nursery rhyme, a children's poem. The term Goddess sounds very nice but this is ironic as he is satirizing Celia. He does not agree with this and cleverly satirizes her but in a subtle manner. ...read more.

The fourth and final poem to be examined is the Ruler of the Queens Navee by Sir William Schwenck Gilbert. The character of Joseph Porter in terms of business background resembles that of a bookseller William Henry Smith (1825-91), who had entered parliament in 1898 and had been appointed First Lotrd of Admiralty in 1877. Smith had made a fortune through expanding his fathers bookselling business in the Strand by setting up railways station bookstalls and newsstands to become Britain's biggest bookseller and newsagent. The object of Gilbert's satire is not so much the person of publisher and politician W.H Smith. Gilbert was attacking the long-standing aristocratic tradition of purchasing commissions. Instead of "serving a term" as a midshipman, Sir Joseph Porter has taken a strictly political route to the admiralty. Also, a method is ridicule is the fact that he is related to "Cousin Hebe". Overall, Poets over the sentries have sued satire to comment on their times in many different ways. There has been use of ironic lines, alliteration, hyperbole and other forms of literary methods as in the subversion of well-established literary tradition. However each has been effectively used to satirize their times in different ways. ?? ?? ?? ?? ...read more.