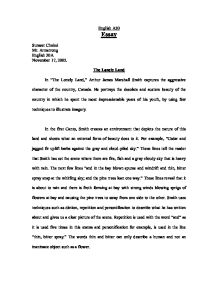 English A30 Essay Sumeet Choksi Mr. Armstrong English 30A November 17, 2002. The Lonely Land In "The Lonely Land," Arthur James Marshall Smith captures the aggressive character of the country, Canada. He portrays the desolate and austere beauty of the country in which he spent the most impressionable years of his youth, by using few techniques to illustrate imagery. In the first Canto, Smith creates an environment that depicts the nature of this land and shows what an external form of beauty does to it. For example, "Cedar and jagged fir uplift barbs against the gray and cloud-piled sky." These lines tell the reader that Smith has set the scene where there are firs, fish and a gray cloudy sky that is heavy with rain. ...read more.

The words thin and bitter can only describe a human and not an inanimate object such as a flower. In the second Canto, Smith further describes the surroundings of this Lonely Land and writes of how another beauty of nature disarrays that of another. The first few lines of this verse, "A wild duck calls to her mate," is a personification. A duck cannot call. Only humans can do this. Smith could have used quacks instead of calls. The next line "and the ragged and passionate tones stagger and fall and recover, and stagger and fall," is also a personification. Only humans can stagger and fall, not tones. ...read more.

The words dissonance and resonance are imitative harmony. Another literary device used in this stanza is personification, for example "wind-battered branch" and "smoky cry." The last Canto of the poem is a Quatrain. This is a four-line stanza and it has a repetition in it. For example, "strength" is written twice. The lines "This is the beauty of strength broken by strength and still strong," has a hidden message in it which is complicated to understand but what it may mean is that, even though there is beauty in strength, and it is broken by strength, it is still strong. Even though Smith does not make this message quite clear, it has been explained to an understandable cause. Written By Sumeet Choksi Number of words: 610 ...read more.