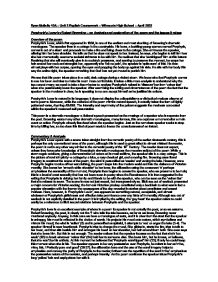 Porphyria's Lover by Robert Browning - an Analysis and exploration of the poem and the issues it raises.

Ryan Mullally 10A - Unit 3 English Coursework - Wilnecote High School - April 2002 Porphyria's Lover by Robert Browning - an Analysis and exploration of the poem and the issues it raises Overview of the poem Porphyria's Lover, which first appeared in 1836, is one of the earliest and most shocking of Browning's dramatic monologues. The speaker lives in a cottage in the countryside. His lover, a budding young woman named Porphyria, comes in out of a storm and proceeds to make a fire and bring cheer to the cottage. She embraces the speaker, offering him her bare shoulder. He tells us that he does not speak to her. Instead, he says, she begins to tell him how she has momentarily overcome societal strictures to be with him. He realises that she 'worshipped' him at this instant. Realising that she will eventually give in to society's pressures, and wanting to preserve the moment, he wraps her hair around her neck and strangles her, apparently she 'felt no pain', the speaker is 'quite sure' of this. He then almost plays with her corpse, opening the eyes and propping the body up against his side. He sits with her body this way the entire night, the speaker remarking that God has not yet moved to punish him. We see that this poem takes place in a cold, dark cottage during a violent storm. We know also that Porphyria comes to see her lover and tries to make his room more comfortable. It takes a little more analysis to understand why the two cannot marry; we need to take a few minutes to analyse Porphyria's refusal to 'dissever' her from 'vainer ties' when she passionately loves the speaker. After examining the setting and circumstances of the poem the fact that the speaker is the murderer is clear, he is speaking to no one except himself as he justifies his actions. ...read more.

It could be seen that the speaker's madness is a way to cope with the loss of a loved one and by killing Porphyria: the killer can be assured that he will always have someone to accompany him. The speaker, Porphyria's Lover, chillingly tells the story in a calm and steady tone, though actually he may have gone insane and killed Porphyria, it is not obvious. The calm nature of the speaker further aids the construction of surrealism in the poem, in no way do the speaker's tone and the murder accompany each other, as I have previously explained the steady tone used by the speaker is used earlier in the poem as a device to fool the reader, therefore enhancing the shock of the killing even further. Throughout the poem there is no hint of violence. When we analyse the speaker and consider what he reveals about himself we immediately assume that the speaker is insane. We are unaware of the severity of his depression, details from the poem, which illustrate his mental state. We discuss his lack of concern for his physical comfort, his inability to speak to Porphyria, and his illogical assumption that his act of murder is acceptable. The reader questions if Porphyria is merely a hapless victim of her insane lover. If she is, the reader muses as to why she should sit demurely by her lover's side, innocent and sweet. Porphyria could also be seen as a victim of societal pressures, marrying the respected gentleman, unable to follow her heart. Porphyria could be a poor girl split between her head and her heart: a moral dilemma. This view is supported by the poem to an extent because she shows some passion and love for her 'Lover', bearing her shoulder to him; she seems almost desperate, knowing that she cannot marry him. On the other hand Porphyria could be interpreted by a reader as a teasing girl, the type of girl who wants to have her cake and eat it too. ...read more.

Indeed, the auditor may appear to be absent or dead as in Porphyria's Lover, out of earshot, or simply inattentive. It is this strongly rhetorical language which distinguishes the dramatic monologue from the soliloquy, for it shows the speaker arguing with a second self. We are coaxed out of our natural sympathy with the first-person speaker by the vehemence of the arguments made. We are always left to muse over many questions and with Poems like Porphyria's lover many people have different opinions. The distinguishing characteristic of Browning's dramatic monologues is that they make new demands of the reader, and those extra-textual demands are signalled within the text by the figure of the auditor. That listening figure and the tone that the speaker adopts in order to make his or her case are the most important new ingredients in the dramatic monologues. As a result of the listener not always physically present in the monologues, most critical assessments have misunderstood its significance. In fact, the presence of the auditor determines how the reader must react to the speaker, and thus the proper questions about the poem are not those which ask about the relationship between the speaker's ideas and the poet's; instead we must ask about the speaker's effect upon his listener. From this rhetorical effect we can infer the dramatic situation, and it is the interplay among the characters in these scenes which Browning wishes us to imagine. Observing the speakers as their listeners do, we find we have to piece together scraps of information to complete a picture of the speaker, and even, sometimes, simply to figure out what is going on. Thus, in each re-reading we must relive the process of discovery that the listener experiences. Rather than a balance of sympathy and judgement, a better description of this process of discovery is engagement, then detachment: we readers must become engaged in the game of imagination which the poem asks us to play before we can attain a detached, critical view of the whole work. ...read more.