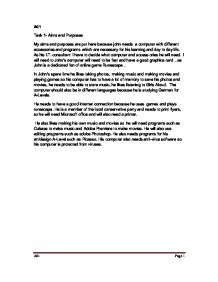 Designing a system for an IT user - He needs to have a good internet connection because he uses games and plays runescape. He is a member of the local conservative party and needs to print flyers, so he will need Microsoft office and will also need a prin

A01 Task 1- Aims and Purposes My aims and purposes are put here because john needs a computer with different accessories and programs which are necessary for his learning and day to day life. As his I.T. consultant I have to decide what computer and accessories he will need. I will need to John's computer will need to be fast and have a good graphics card, as John is a dedicated fan of online game Runescape. In John's spare time he likes taking photos, making music and making movies and playing games so his computer has to have a lot of memory to save his photos and movies, he needs to be able to store music, he likes listening to Girls Aloud. The computer should also be in different languages because he is studying German for A-Levels. He needs to have a good internet connection because he uses games and plays runescape. He is a member of the local conservative party and needs to print flyers, so he will need Microsoft office and will also need a printer. He also likes making his own music and movies so he will need programs such as Cubase to make music and Adobe Premiere to make movies. He will also use editing programs such as adobe Photoshop. He also needs programs for his art/design A-Level such as Picasso. His computer also needs anti-virus software so his computer is protected from viruses. Task 2- Hardware Requirements- Input devices Item Description Why Required? Keyboard A keyboard is made up of keys used to insert numbers, text and punctuation, it is also has other keys. Most keyboards are qwerty keyboards because researchers have found that this is the preferred layout for a keyboard. Keyboards are made so hands are laid out in a natural, comfortable position. John needs to use email, design flyers and generally use a keyboard to type in text. ...read more.

He could use the sound card to transfer the sounds from the computer to the output device. John needs a good sound card so when the sound is projected from the computer to the speakers or headphones the quality of the sound will be clear. ROM ROM stores permanent data about the computer which cannot be changed by the user. The data on the ROM cannot be deleted unless the computer is rebooted. He needs this to make the computer save all the permanent memory, used to start up the computer. Without the ROM the computer wouldn't start up as it contains the operating system to start up the computer. RAM RAM stores temporary memory and helps the computer to run. A typical ram is about 1-2GB. The ROM chip is used to hold data that cannot be changed by the user. Without the RAM the computer wouldn't be able to run, the higher the RAM more processes can be happening at one time. John would need at least a 4GB RAM as that will provide john with a lot of temporary memory to make his computer faster. Task 2- Storage Devices Item Description Why Required? Hard Disk It stores data, all data is stored on the hard disc. The hard disk is the main storage device on a computer it is needed for storing everything from pictures to software. The data is stored in this magnetic material. Thus, the hard disk is known as a magnetic storage device. He needs to save all his music, movies, work and other files. Everything he does needs to be saved on the hard disk so he needs. He needs a hard disk that comes with his computer to have a lot of memory preferably more than 500GB, so it is unlikely for him to need more memory. Flash Memory A flash memory, also known as a USB, stores memory which can be transferred from one computer to another computer. ...read more.

An alternative video editing software is windows movie maker which comes free with windows 7, but windows movie maker doesn't have as much editing features because it is free and John will usually get more for something he pays for. Task 3 -Software Requirements Item Description Why Required? Reason Reason is a music making program which allows you do add and edit different sounds. Reason is a professional music making software which allows someone to edit music or sounds, just like professionals e.g. DJs. In John's free time he likes making his own music so reason would be a good program for him to use. John can create a remix of other people music tracks or he can create his own music. He can also go back and edit every time frame of his music track. Microsoft German Language Pack Microsoft German language pack converts any language to German. It can even convert an internet page to German language. He studies German for his A-levels. John can use the German language pack to help him convert English to German if he needs help with his work. /he can also use the German language pack to convert all of his settings to German language so he can get used to reading German. Windows Live Messenger Msn messenger is a free messenger which is easy to use and is used by many people. John can also use windows live messenger on his mobile so he can talk to a contact even when he isn't at his compute. It is very easy to use and he can add any contacts and make video/voice/text chats to them. John needs to talk to his friends and family. He also likes to make video calls. Windows live messenger is free and can be used just to write messages to a friend or family and John can also send happy or sad emotions to a contact he can also attach and send files to somebody in his contact list. ?? ?? ?? ?? A01 Page 1 ...read more.