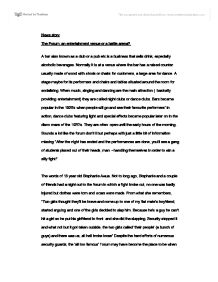 Example of a News Story for student magazine

News story The Forum; an entertainment venue or a battle arena? A bar also known as a club or a pub etc is a business that sells drink, especially alcoholic beverages. Normally it is at a venue where the bar has a raised counter usually made of wood with stools or chairs for customers, a large area for dance. A stage maybe for its performers and chairs and tables situated around the room for socialising. When music, singing and dancing are the main attraction (basically providing entertainment) they are called night clubs or dance clubs. Bars became popular in the 1920's when people will go and see their favourite performers' in action, dance clubs featuring light and special effects became popular later on in the disco craze of the 1970's. ...read more.

Because he's a guy he can't hit a girl so he put his girlfriend in front and she did the slapping. Security stopped it and what not but it got taken outside, the two girls called 'their people' (a bunch of guys) and there was us, all h**l broke loose" Despite the hard efforts of numerous security guards, the 'all too famous' forum may have become the place to be when looking for a good fight. There have been an increasing number of fights between students at the forum, some of which involve the police. "The police weren't called this time because the security guards stopped it in time but my flat mate managed to somehow pull a ligament or something in her arm but that is because she fell ... ...read more.

behave yourself" So how exactly do we get students to 'behave themselves', before entering the forum students are already stopped and searched, bags are also searched too. Security is in place within the rooms of the forum itself, inside and out, what else can be done? "I think the problem lies with the drinking, people change into different people when they drink, am not really a drinker myself so I notice these things ... maybe bar monitors should be introduced, they stand at the bar and basically monitor how much you drink. If you look like you can't take anymore, they refuse to let you buy another drink ... better to have students tipsy rather than drunk." Bar monitors as suggested by Stephanie don't seem too bad; in bringing the forum back to its soul purpose (entertainment) new ideas are more than welcomed. ...read more.