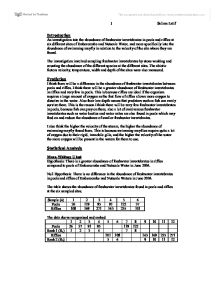 This would mean that they were feeding heavily on the invertebrates and again reducing their number, whereas no fish were found in the pools of that particular site. From looking at my scatter graph generally as velocity increases the abundance of swimming mayfly increases. This may be because swimming mayfly nymphs cannot beat their gills because their gills are small and rigid and so need to be in fast flowing water to get enough oxygen to survive. They have morphological adaptations to survive in waters of strong current by having hooks on their feet and fastening themselves onto rocks while feeding on detritus and other invertebrates. They can bring their abdomen up which has gills attached to it to get more water over them and therefore oxygen. Therefore the faster the velocity of the water the more oxygen there is and the more swimming mayfly able to survive. Their high abundance in fast velocity water may be due to them being good swimmers allowing them to escape predators with their agility. Their torpedo-shaped bodies and filaments with hairs attached to each of the three tails allowing them to swim very fast. However my scatter graph shows that after a certain point, as velocity increases the abundance of swimming mayfly decreases. This may be because high velocity water means that detritus and algae are swept away and the swimming mayfly nymphs are not able to get enough food. Detritus, dead leaves from surrounding plants is a poor food source, its source of nitrogen is low and carbon as cellulose means it cannot be digested and used by macrorganisms, therefore swimming mayfly are also herbivores, this means that they need to be in medium velocity which allows plants such as algae to grow and so as my scatter graph shows are not in a high abundance at very high velocities. Therefore my prediction was only partly correct as the swimming mayfly probably need a balanced velocity which allows them to get enough oxygen while allowing enough food to remain in the water. ...read more.

The limitations to the procedure and errors associated with the investigation makes my conclusion that as velocity increases so does the abundance of swimming mayfly uncertain. Although from looking at my scatter graph there is some correlation, but this is not strong. Also my spearman's rank test shows that there were a lot of anomalous results present. The result obtained from my statistical analysis was just enough to allow me to accept my hypothesis so that one more slight difference would have caused me to accept my null hypothesis. Therefore it may not be the velocity that attracts the huge number of swimming mayfly but that they prefer to live in riffles which generally seem to have a higher velocity. I think the conclusion drawn that there are more freshwater invertebrates in riffles than pools may be debatable from looking at my statistical analysis and the limitations discussed above. This is because although I can reject my null hypothesis at the 5% significance level I cannot reject it at the 1% significance level where U has to be less than or equal to 2. Therefore my conclusions are not as reliable as they could be as there is a 5% chance that my conclusion is incorrect. Also the sample size of sites was not enough to draw these conclusions from, as I did not obtain a constant cumulative mean. Therefore my conclusions could be wrong or further improved if more sites of pools and riffles were studied. I think if it was not for the limitations a stronger correlation of the abundance difference in pools and riffles could have been proven. If each individual site did not have many other variables involved such as its size, sheep faeces, weather conditions, etc the results would allow my conclusion to be more accurate. It is very hard to control the conditions for a study such as this and a long period of study with the improvements suggested is needed to increase the validity of the results. 1 Salima Latif ...read more.