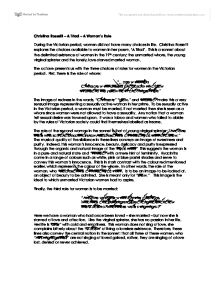 Christina Rossetti - A Triad - A Woman's Role During the Victorian period, women did not have many choices in life. Christina Rossetti explores the choices available to women in her poem, 'A Triad'. This is a sonnet about the delimited existence of women in the 19th century: the unmarried w***e, the young virginal spinster and the lonely, love-starved married woman. The octave presents us with the three choices of roles for women in the Victorian period. First, there is the role of w***e: "... one with lips Crimson, with cheeks and bosom in a glow Flushed to the yellow hair and finger-tips" The image of redness in the words, "Crimson," "glow," and "Flushed" make this a very sensual image representing a s******y active woman in her prime. To be s******y active in the Victorian period, a woman must be married, if not married then she is seen as a w***e since women were not allowed to have a sexuality. ...read more.

This is in stark contrast with the colour red mentioned earlier, which represents the colour of the w***e. In other words, the role of the woman, who "Bloomed like a tinted hyacinth", is to be an image-to-be-looked at, an object of beauty to be admired. She is meant only for "show." This image is the ideal to which unmarried Victorian women had to aspire. Finally, the third role for women is to be married: "And one was blue with famine after love, Who like a harpstring snapped rang harsh and low The burden of what those were singing of." Here we have a woman who had once been loved - she married - but now she is starved of love and affection. Like the virginal spinster, she has no passion in her life. Her life is "blue" with cold and emptiness. ...read more.

It is unclear which of the two women "Took death for love, and won him after strife," or which one of the women "droned on sweetness like a fattened bee." It could be the spinster or the w***e, with the spinster being killed into art, whilst the w***e is buried by shame. Meanwhile, the third woman could be the wife, who it could be said, although she attempted to be all sweetness she complained monotonously. The way the sonnet interweaves all three women together, suggests that they are united in their misery. They are all "on the threshold" of life and they should be facing a profusion of opportunities, however, no matter what role a woman chooses in 19th century Britain, she is "all short of life." In other words, she faces an empty future with no love, no copy and only abject misery. ...read more.