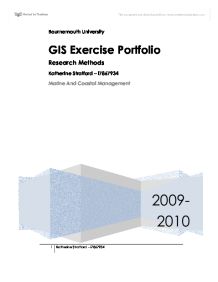 GIS exercise. This exercise surrounds Black Ven, the largest coastal landslide in the UK and the whole of Europe. It is situated between Charmouth and Lyme Regis, and is of great importance as both of the towns rely heavily on their landscape and tourism

Introduction This exercise surrounds Black Ven, the largest coastal landslide in the UK and the whole of Europe. It is situated between Charmouth and Lyme Regis, and is of great importance as both of the towns rely heavily on their landscape and tourism for income. The big threat to the economic stability of the two towns is that the buildings and infrastructure may suffer if the land slides again; this would affect tourist travel and holiday dwellings as well as the living establishments of locals, and their everyday lives. This portfolio assesses this threat on Lyme Regis and Charmouth, and illustrates the extent to which Black Ven could affect the area if it becomes active again with the use of GIS analysis, LiDAR and an OS map of West Dorset. Map 1 - Map of Local Topography (c) Crown Copyright/database right 2009. An Ordinance Survey/EDINA supplied service Map 1 shows the topography of Black Ven and its surrounding area. The area in grey off shore shows the sea bed, this has been used as a constant throughout the analysis as the landslide does not affect this area. ...read more.

This DSM was then changed to a colour ramp, which when combined with the raster, shows clearly where relief is high or low. Map of Elevation Change due to Landslide Activity(c) Crown Copyright/database right 2009. An Ordinance Survey/EDINA supplied service This map shows the difference between the 1998 and 2001 LiDAR DSMs. The importance of this map is that it shows the affect of the landslide that occurred in February 2001. Map 2 shows where the landslide occurred which makes it possible to mark the landslide on the next map. Red areas on the map show where most change has occurred; this was created by using the 'minus' tool on arcGIS to subtract the values of the 1988 LiDAR DSM from the 2001 LiDAR DSM. To show this change in context the hillshade from map 1 was overlaid onto map 2. Map of distance from the landslide (c) Crown Copyright/database right 2009. An Ordinance Survey/EDINA supplied service Map 3 uses the 'Euclidian Distance' tool of arcGIS to show areas within 1000m of the landslide. ...read more.

Making these stand out shows clearly the areas of infrastructure under threat (A3052 from north of Lucy's Ledge to north-west of Lyme Regis Golf Club and from north of Longmoor Manor to south of Wood Farm) and the buildings under threat (mainly the west side of Charmouth residences and the east side of Lyme Regis residences, including schools, hotels and churches, etc.). Recommendations: The process used in creating map 4 can be repeated for any building or piece of infrastructure under enquiry by increasing the buffer to the distance of the place in question and then relating it back to the Euclidian Distance to see how threatened it is. It is my recommendation that this is how the analysis is used to evaluate any future queries or anxieties over where Black Ven may damage building and infrastructure. It would be very simple to establish where a post coded location lies on the SY39 OS map and then adjust the buffer to interpret the damage likely to occur. Although maps 1-3 were created to aid in reaching the stage of map 4 they would not need to be altered to answer a query, they have only been included to give factual information in the portfolio. ...read more.