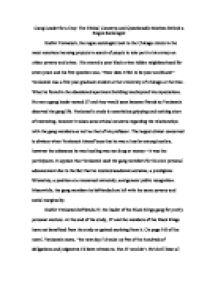 Gang Leader for a Day: The Ethical Concerns and Questionable Motives Behind a Rogue Sociologist. Sudhir Venkatesh, the rogue sociologist took to the Chicago streets in the most notorious housing projects in search of people to take part in his survey o

Gang Leader for a Day: The Ethical Concerns and Questionable Motives Behind a Rogue Sociologist Sudhir Venkatesh, the rogue sociologist took to the Chicago streets in the most notorious housing projects in search of people to take part in his survey on urban poverty and crime. He entered a poor black crime ridden neighbourhood for seven years and his first question was, "How does it feel to be poor and black?" Venkatesh was a first-year graduate student at the University of Chicago at the time. What he found in the abandoned apartment building was beyond his expectations. He met a gang leader named JT and they would soon become friends as Venkatesh observed the gang life. Venkatesh's study is nonetheless gripping and nothing short of interesting, however it raises some ethical concerns regarding the relationships with the gang members as well as that of his professor. The largest ethical concerned is obvious when Venkatesh himself says that he was a hustler among hustlers, however the substance he was hustling was not drug or money - it was the participants. It appears that Venkatesh used the gang members for his own personal advancement due to the fact that he received academic acclaims, a prestigious fellowship, a position at a renowned university, and general public recognition. ...read more.

Even when faculty and an attorney warn him that participating in illegal gang activities puts him at risk of criminal prosecution, he continues his research anyways. Venkatesh, who claimed to be writing JT's biography, has everyone convinced. . JT's mother was even deceived by Venkatesh, "My son says you're writing about his life - well, you may want to write about this community, and how we help each other." (page 43). Sudhir had given not only JT but also his community a false sense of hope and security for his own self-serving motives. His motives are somewhat malevolent in that his research required him to work with and encourage a vicious gang leader for nearly seven years. During this time period, he gained the trust and friendship of many people that, in the end, he would turn his back on and take from them the hope of ever finding a life beyond community housing. Venkatesh fails to acknowledge and excuses his ethical failings as a researcher. Throughout the entire study he never once filed a plan with the Institutional Research Board until he is almost done his research. ...read more.

Venkatesh is lucky that he did not get harmed in the process, or killed for that matter. Throughout the book, he comes across as na�ve and almost too egotistical for the nature of his work and the situation he has immersed himself in. It appears that Venkatesh and JT are using each other mutually, that is a deception. Venkatesh uses JT to become involved in the Black Kings crack gang for the purpose of observing how gangs functions and how society responds to gangs. JT thinks he is using Venkatesh for future recognition as he told him he would write his biography. This never happened. Venkatesh makes a bold statement when he claims that he became a gang leader for a day because in reality he avoided doing anything that could get him in serious trouble with the law. He claims to be a hustler among hustlers, but the only thing he is hustling is the hustlers themselves. Therefore, while the true hustlers are hustling drugs to make a meek living, they are being hustled by a sociologist who would soon become a success in the world of academia and leave the gang members in their destitute situations. ...read more.