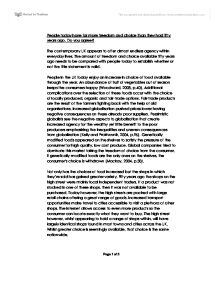 People today have far more freedom and choice than they had fifty years ago. Do you agree?

People today have far more freedom and choice than they had fifty years ago. Do you agree? The contemporary UK appears to offer almost endless agency within everyday lives. The amount of freedom and choice available fifty years ago needs to be compared with people today to establish whether or not the title statement is valid. People in the UK today enjoy an increase in choice of food available through the year. An abundance of fruit of vegetables out of season keeps the consumers happy (Woodward, 2005, p.40). Additional complications over the selection of these foods occur with the choice of locally produced, organic and fair-trade options. Fair-trade products are the result of the farmers fighting back with the help of aid organisations. Increased globalisation pushed prices lower having negative consequences on these already poor suppliers. Pessimistic globalists see the negative aspects to globalisation that create increased agency for the wealthy yet little benefit to the poor producers emphasizing the inequalities and uneven consequences from globalization (Kelly and Prokhovnik, 2004, p.96). Genetically modified foods appeared on the shelves to satisfy the pressure of the consumer for high quality, low cost produce. ...read more.

It is widely received that an individual will research all the available options before taking the advice of an expert. Contemporary society lives within an environment of increased technology. Television and media companies relay news around the globe instantaneously to be watched live on computers or television. Newspapers report more on scandal rather than factual news as they would of fifty years previously. Worryingly, the current media infrastructure consists of ten major companies which have the power to dominate the market on a global scale (Mackay, 2004, p.57). These companies have power over what is and what is not released to the public thus people are able to watch instant news but only if it is approved by the owning media company. Satellites beam these pictures into our television sets with an increasing number of channels appearing yet the choice of television programmes available to watch are not raising at the same rate. Frustrated people can be heard around the country, "All these channels, and still nothing to watch!" Increased technology of the internet and media production introduces global issues into everyday lives. Environmental concerns have been televised to an extent that no-one in the Western world could deny that they had not heard of global warming. ...read more.