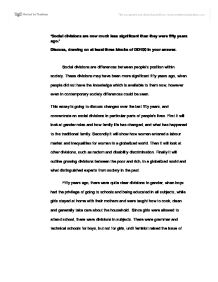 Social divisions are now much less significant than they were fifty years ago. Discuss.

'Social divisions are now much less significant than they were fifty years ago.' Discuss, drawing on at least three blocks of DD100 in your answer. Social divisions are differences between people's position within society. These divisions may have been more significant fifty years ago, when people did not have the knowledge which is available to them now, however even in contemporary society differences could be seen. This essay is going to discuss changes over the last fifty years, and concentrate on social divisions in particular parts of people's lives. First it will look at gender roles and how family life has changed, and what has happened to the traditional family. Secondly it will show how women entered a labour market and inequalities for women in a globalized world. Then it will look at other divisions, such as r****m and disability discrimination. Finally it will outline growing divisions between the poor and rich, in a globalized world and what distinguished experts from society in the past. Fifty years ago, there were quite clear divisions in gender, when boys had the privilege of going to schools and being educated in all subjects, while girls stayed at home with their mothers and were taught how to cook, clean and generally take care about the household. ...read more.

Another feminist writer, Saskia Sassen outlines that economic globalization brings inequality not only to women in developed countries but also in the Third World, where there is not enough income. Because of internationalized manufacturing production, and pressures from low-cost imports, many women in poor countries have entered the labour market. Mostly these are young women, and their households are left without the important contributions women make. Due to poor education and training and family responsibilities, women have significantly less money, and they are not financial independent. Globalization is a phenomenon including changes in culture, politics and economics globally, where some parts of the world are getting closer and others are drifting further apart with no reference to geographical distance. Some people might benefit from globalization, and some might not. Globalization brings new patterns of migration, which has negative effects for women, as they can be easily pressured into prostitution or be dislocating from their families. (Held, 2004, p.101) Many people and families decide to migrate to developed countries for better lives, but it is not always easy for women, who cannot find a decent job, due to their education. ...read more.

General practitioners were well respected between their patients, who took their advice and treatments seriously. But in nowadays people do not trust the experts as much; it could be that the development of new complementary and alternative medicine and new easily accessible information sources, which contradicts what the experts say. So this means, people have much more knowledge and available information from other sources; that it might lead to anxieties or uncertainties. As demonstrated within this essay social divisions can be seen in some areas to less significant than they were fifty years ago. Especially when it look at gender within the work place and the family set up. Divisions can also be seen to be deteriorating rapidly in terms of r****m and disability discrimination. However these are not global trends. However what is important to note is that how some social divisions are actually getting bigger and at a very fast rate. This can be demonstrated by the access to knowledge. It should be available to everyone but people without such comforts like the Internet and satellite TV are being left behind. So it can be summarized that in many ways social divisions are less significant in many aspects, but in some ways social divisions can be seen as far more significant as they were fifty years ago. ...read more.