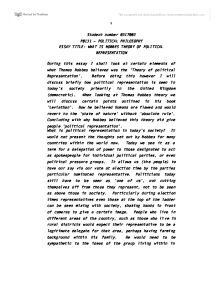 Political Philosophy: What is Hobbes theory of political representation.

Student number 0317003 P0131 - POLITICAL PHILOSOPHY ESSAY TITLE: WHAT IS HOBBES THEORY OF POLITICAL REPRESENTATION During this essay I shall look at certain elements of what Thomas Hobbes believed was the 'Theory of political Representation'. Before doing this however I will discuss briefly how political representation is seen in today's society primarily in the United Kingdom (democratic). When looking at Thomas Hobbes theory we will discuss certain points outlined in his book 'Leviathan'. How he believed humans are flawed and would revert to the 'state of nature' without 'absolute rule'. Concluding with why Hobbes believed this theory did give people 'political representation'. What is political representation in today's society? It would not present the thoughts set out by Hobbes for many countries within the world now. Today we see it as a term for a delegation of power to those designated to act as spokespeople for individual political parties, or even political pressure groups. It allows us (the people) to have our say via our vote at election time by the parties particular nominated representative. Politicians today still have to be seen as 'one of us', not cutting themselves off from those they represent, not to be seen as above those in society. Particularly during election times representatives even those at the top of the ladder can be seen mixing with society, shaking hands in front of cameras to give a certain image. People who live in different areas of the country, such as those who live in rural districts would expect their representative to be a legitimate delegate for that area, perhaps having farming background within his family. ...read more.

If the sovereign executes a subject, the people execute the subject, if the Sovereign declares war, the people are declaring war. Hobbes believes this absolute power would give the people a sense of security from the threat of a violent death by other men. Again in Oakeshott book he says "Sovereign Ruler authorized and empowered by convenanters who thereby become 'united in one person' transforms themselves from the condition of war of all against all". (Oakeshott page 41 - 1975). The fear of punishment or student no: 0317003 loss of life if breaking the laws would be strong enough to secure obedience. Hobbes also outlines this in 'Leviathan' by retelling a story concerning a man onboard a ship travelling with all his worldly goods. Hobbes tells us that he would willingly throw these goods overboard to lighten the ships weight to stop the ship from sinking, if it would increase the chances for preserving his life. Hobbes states coercion through the fear of a man losing his life makes him act willingly. However can the same still be said when acquiring sovereignty through force, where the people have not had the right to the free selection, does the Sovereign then not just become a tyrant? Again Hobbes would say that these people did have the choice to die rather than except this Sovereign Representative. Also he said tyranny is only a word given to a government that the people are unhappy with. As outlined previously the Sovereign makes all the laws and may employ educated people to implement these laws. ...read more.

He felt that they should be looked after by the state (welfare) as outlined in chapter thirty of 'Leviathan' "not to be left to the charity of private persons; but to be provided for" (Hobbes page 387 - 1968). The other side of this coin is that Hobbes also stated that those who were able to work should always be forced to work. Because if everyone who could work did not, would become a drain on the state and this would eventually weaken the state. In turn if the state (the people) were weak then the Sovereign would be weak, and a weak Sovereign can be overthrown by war at anytime. In conclusion Hobbes goal is to provide a theory that moves men from the 'State of Nature' which is a lawless state with no morality. Hobbes believed that humans need one supreme authority for a peaceful coexistence - the Sovereign Representative. In order to lift man from this state there is no alternative but to use fear and coercion to keep them to their social contract. By using this social contract so that people give up their natural rights they are willing picking a Sovereign Representative. McCelland states "the outcome of Hobbes argument is clear: either you stick with a single sovereign who no contracts with his subjects, or you begin to fall back down the slippery slope into the student no: 0317003 'State of Nature', which no rational man wants" (McCelland - page 199 - 2003). Hobbes believed that people only have a will through a representative and that representation by its definition would be the Sovereign giving society political representation. ...read more.