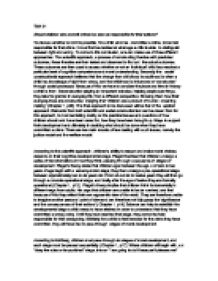 Should children who commit crimes be seen as responsible for their actions?

TMA 01 Should children who commit crimes be seen as responsible for their actions? To discuss whether or not it is possible, for a child who has committed a crime, to be held responsible for that crime. It must first be decided at what age a child is able to distinguish between right and wrong. To come to this conclusion, one can make use of three different approaches. The scientific approach, a process of constructing theories with predicted outcomes, these theories are then tested and observed to find out the actual outcomes. These outcomes are then used to access whether or not an 'individual' child has reached a particular level of cognitive competence and moral understanding. Secondly the social constructionist approach believes that the change from childhood to adulthood is when a child has knowledge of right from wrong, and that childhood is influenced or 'constructed' through social processes. Because of this we have to consider the place and time in history a child is from. Deconstruction playing an important role also, helping people see things, they take for granted in everyday life, from a different perspective. Showing them how their everyday lives are constructed. Implying that 'children are a product of human-meaning-making' (Chapter 1, p26). The final approach to be discussed will be that of the applied approach. ...read more.

These two stages are part of, what Kohlberg calls, the Pre-conventional level. The next level, Conventional, comprises of stage 3 ''I am loyal to you because you care for and love me''. Stage 4 being '' I must be good because the law states that I must''. Moving onto the Principled level with stage 5 being, ''I am good because I do not wish to hurt others', and finally into stage 6 of ''I am going to feel bad if I am not good'' (Chapter 1, p17). While all children are said to pass through these stages, they are all greatly influenced by their culture and upbringing, and have similar morals to the people who have influenced them the most, i.e. their parents or guardians. However, Kohlberg's theory is based on objective, impersonal and ideal grounds, implying that moral judgements are universal (Chapter 1, p16). In contrast the social constructionist approach 'sees different ideas about children and childhood as products of different world views' (Chapter 1, p19). A very good example of that would be of the Japanese belief that children are not individuals, that they are actually extensions of their parents, and should their mother commit suicide, then they, as children, will no longer have an identity and would have an incomplete life. ...read more.

Where, wrongdoings must be punished. The justice model sends children who have committed crimes, to young offenders' institutes where they will have to ''do the time for the crime''. Because concepts of what a child is, vary from culture to culture and from one historical time to another, with children defined by the way they are dressed and treated and with social and cultural norms about what they should and should not do (Chapter 1, p11). Social constructions must be put in their contexts before judgements can be made about right from wrong (Chapter 2, p53). Similarly science can offer a guide to what age a child should have developed the cognitive and moral ability to be able to tell right from wrong, but this is only a guide and it has been proved, as discussed earlier, that it also greatly depends on the child's upbringing with respect to where and when they are brought up. It seems the applied approach, making use of both scientific and social constructionist approaches within the relevant discourse is the best way to decide if a child is to be penalised for their crime. Weighing up whether that particular child, from their particular cultural background has reached the cognitive and moral developmental stage to be able to realise that they have committed a wrong and realise the consequences of their doing. Without the ability to do this, they will not be able to be held responsible for their actions. ...read more.