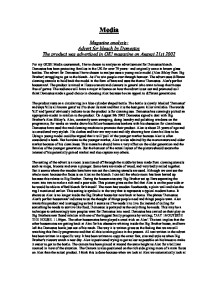 Agazine analysis: Advert for bleach by Domestos The product was advertised in OK!

Media Magazine analysis: Advert for bleach by Domestos The product was advertised in OK! magazine on August 21st 2002 For my GCSE Media coursework, I have chosen to analyse an advertisement for Demestos bleach. Domestos has been protecting families in the UK for over 70 years - and originally came in brown glass bottles. The advert for Demestos I have chosen to analyse uses a young male model (Alex Sibley from Big Brother) struggling to get to the bleach. As if to win people over through humour. The advert uses different cleaning utensils to hold back the model in the form of bars and uses the theme 'Domestos. Alex's perfect housemate'. The product is aimed at House owners and cleaners in general who want to keep their house free of germs. The audience will have a major influence on how the advert is set out and promoted so I think Demestos made a good choice in choosing Alex because he can appeal to different generations. The product rests on a circular rug in a blue cylinder shaped bottle. The bottle is clearly labelled 'Demestos' and says 'kills all known gems' as if to show its rank and that it is the best germ killer available. ...read more.

The room has wooden floorboards, a plain wall and also the rug I mentioned earlier. This setting is symbolic in the way that is represents a typical modern home. It shows us Alex is no longer inside the Big Brother house but now back at home. The phrase 'Demestos. Alex's perfect housemate' indicates to us the thought of things people need and things people want. Alex wants this product and is struggling so bad it seems as if he needs it to live. So instead of calling for something he needs to survive like food, Domestos is potrayed as the only thing he needs. This may be a technique to unknowingly turn peoples want for Demestos into need. Demestos has carried on their play on Big Brothers new found relation with one of the biggest family programs by writing; 'DAY 16 OUTSIDE THE HOUSE. 11.04pm. The other housemates have played a cruel trick on Alex'. The text implies that the other housemates are getting back at Alex for his obsessive whining inside the Big Brother house, and have left the Domestos bottle just out of his reach. The way it is written gives us the feeling that we are still watching this family programme and that all this is taking place in the present. ...read more.

The advert is two pages after the middle page (pg. 79) which shows that this advert isn't exactly a 'big scoop'. But it has been inserted next to Kate Lawler's page about her invitation to the Arsenal football ground 'Highbury'. This was most probably done because the relation between Alex and Kate is that they were both housemates in Big Brother 3. This whole product in relation to Alex gives me the feeling of the phrase; 'to be Alex Clean, Buy Demestos'. I believe the Demestos advert is very successful in its aims. It has put its message across as if it is definitely needed to survive, this to me is a very good use of subconsciously getting into the mind of people. The Humour of the whole advert is good for attracting peoples attention and making it stick in their head, this is my favourite thing about the advert. Alex was also used to attract people with his physical appearance, which works because people feel attracted to him and others would want to see what this ex-housemate of Big Brother is up to. I have learnt that there is more to an advert than the eye can see and that the visual view is only the surface of it all. I now know how cunning and skilled advertisers have to be in order to be successful in attracting potential buyers. ...read more.