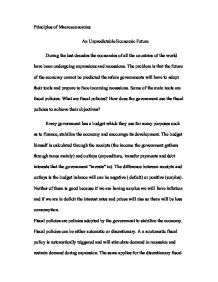 How can the government use fiscal policy to achieve its objectives?

Principles of Macroeconomics An Unpredictable Economic Future During the last decades the economies of all the countries of the world have been undergoing expansions and recessions. The problem is that the future of the economy cannot be predicted therefore governments will have to adopt their tools and prepare to face incoming recessions. Some of the main tools are fiscal policies. What are fiscal policies? How does the government use the fiscal policies to achieve their objectives? Every government has a budget which they use for many purposes such as to finance, stabilize the economy and encourage its development. The budget himself is calculated through the receipts (the income the government gathers through taxes mainly) ...read more.

The same applies for the discretionary fiscal policy, but this one has to be initiated by the government. Often the fiscal policies will have a supply side effect as taxes will discourage the people to work which will lower the potential GDP and also people will start to save more and their consumption will decrease, following a decrease in the real GDP. But how have some governments of the world used fiscal policies to achieve their objectives over the years? The Albanian government adopted the policy of privatization. They say that one day Sali Berisha (Prime Minister of Albania) woke up and decided to privatize the banking and electrical system. This was planned bt the government therefore it was a discretionary policy. ...read more.

Despite this in the last year the Albanian economy has experienced high economic growth and this is expected to keep on going for a long time along with low inflation and stable exchange rates. The point for this policy has always been to have a steady economic growth, keep a low budget deficit and take international small loans only and they seem to have everything under control so far. Fiscal policies are one of the most important tools to regulate the economy and stabilize it. They can be either automatic or discretionary. Albania undertook the path of privatization and so far it all sorted out well for them. The only visual disadvantage the fiscal policies have is their supply-side effect which lowers both potential and real GDP. In my opinion the economy can never be self-regulated and work at a full-employment level, therefore the fiscal policies are vital. ...read more.