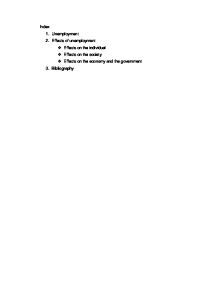 The costs of unemployment.

The long term unemployment can really suffer because employers are unwilling to take a chance on someone that no one else is willing to hire, employers find employment gaps as a negative aspect. Effects on the society Unemployment creates ineqaulities in wealth and income between people in societies. When people are unemployed they lack the income necessary to sustain themselves and their families and a lot of the time this can cause people to turn to illegal means of making money just so that they can feed their families and these can have detrimental effects not only for the individual but for their local community as a whole because it leads to increased rates of crime.The lack of money to spend on private health care , healthy goods and living means that those who are unemployed often lead less healthy lifestyles and have less backup for when things go wrong. ...read more.

The greater the number of the unemployed or the longer they are without work the more money the government has to shell out. This is an additional cost and lost income that can have serious consequences on the rest of the economy because the government is forced to fund unemployment benefits either from incresed taxes or borrowing. The increased taxes affects consumption which in turn may lead to increased unemployment( people spending less, less revenue for companies, companies forced to lay people off). The increased borrowing of money by the government can also have similar effects as the government takes more money than normal out of the financial markets, and therefore causing pressure on interest rates which will result in higher costs for companies, less profits and more lay offs. ...read more.