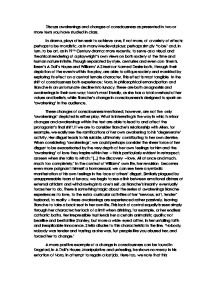 Awakenings and Changes in Consciousness

Discuss awakenings and changes of consciousness as presented in two or more texts you have studied in class. In drama, plays often seek to achieve one, if not more, of a variety of effects: perhaps to be moralistic, as in many Medieval plays; perhaps simply 'to be' and, in turn, to be art, as in 19th Century drama; more recently, to serve as a visual and theatrical rendering of a playwright's own views on both society of the time and human nature infinite. Though separated by style, centuries and even continents, Ibsen's A Doll's House and Williams' A Streetcar Named Desire both, through their depiction of the events within the play, are able to critique society and mankind by exploring its effect on a central female character. This effect is most tangible in the shift of consciousness both experience: Nora, in philosophical emancipation and Blanche in an unfortunate decline into lunacy. These are both anagnorisis and awakenings in their own way: Nora's most literally, as she has a total overhaul of her values and beliefs, while Blanche's change in consciousness is designed to spark an 'awakening' in the audience. These changes of consciousness mentioned, however, are not the only 'awakenings' depicted in either play. What is interesting is the way in which minor changes and awakenings within the text are able to lead to and affect the protagonist's final shift. If we are to consider Blanche's relationship with Allen, for example, we easily see the ramifications of her own awakening to his 'degenerate' activity. ...read more.

While initially Torvald seems unable to understand Nora's decision and appeals to her conscience and maternity in an effort to make her stay, it is implicit in the text that, two-dimensional though he may appear, the changes produced by her shift in consciousness will eventually force him into an awakening of his own. Parallels may be drawn between Torvald and Stanley; both see themselves as the head of the family; both have a machismo that expresses itself through pride. This pride can be seen also through their self-assurance and arrogance, particularly apparent in their treatment of the women in their lives. As Stanley puts it, rather charmingly, 'Remember what Huey Long said - 'Every Man is a King!' And I am the King around here, so don't forget it!' They are also largely the triggering factor in a series of events that causes or creates a context for the central female character's awakening. When considering minor characters with the plays, we immediately see a foil to Torvald and Stanley: in A Doll's House, it is the affable Dr Rank, and in Streetcar, it is Mitch. These characters make a compelling contrast between the more 'macho' males directly eliciting this awakening or change. Dr Rank, greatest friend of Torvald and tortured syphilis sufferer, is perhaps the only man in the play to treat Nora as an equal. This generates for the audience a clear distinction between how things should be and how they truly are, in terms of human behaviour. ...read more.

Nora goes to remarkable effort to truss it well and obscure its less attractive branches. Ultimately, however, it is stripped bare, as Nora flings off the illusions and petty decorations obscuring her vision and affecting her life. This is a shift not only of consciousness, but, more importantly, into truth. Blanche is represented by light throughout the play. She covers the lamp with a shade in attempt to shield herself from being totally seen - this is a way to obscure herself and to more easily hide the wrinkles that explain her age and experience. When seeing Mitch, she picks dimly lit settings for easy concealment of herself and her skin. Stanley rips off the shade violently and almost s******y and all is revealed: her age, her actions and her abuse. In the face of this brutal honesty, as the light burns brightly, she becomes forced to accept the truth, and moves into her final stage of madness. Ibsen and Williams use a variety of techniques to explore these changes: by introducing minor characters, exploring the effects of the chance and, finally, by depicting them through imagery. Ultimately, however, it is the final image in each that persists - Blanche's outbursts at the hospital staff, who are not her Texan oil magnate, while Stanley looks on; Nora's abrupt final words to Torvald before leaving into the night. These events and images, punctuating the play, use tremendous dramatic effect not only to illustrate to the audience the awakenings of Nora and Blanche but equally, with hope, to instigate some vicarious awakening in the audience themselves. ...read more.