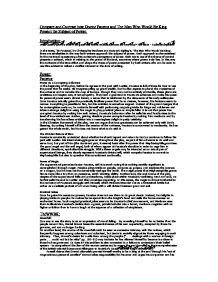 Dr Faustus and The Man Who Would Be King on Power

Compare and Contrast how Doctor Faustus and The Man Who Would Be King Present the Subject of Power. Introduction: What doth it profit a man if he gains the whole world and loses his own soul? The Bible- Sacred Scriptures In the texts, 'Dr Faustus', by Christopher Marlowe and Rudyard Kipling's, 'The Man Who Would Be King', there are similarities in the way both writers approach the subject of power. Each approach is characterised by the continual questioning of its audience's perceptions of power. Both texts use of the theme of control presents a subtext, which in relating to the period of the time, examines where power truly lies. In this way the audience of the time affect and shape the views of power presented by both writers who can be seen to use this subtext to reflect a conflict mirrored in the time of writing. Power: Faustus: Power as a Corrupting Influence In the beginning of the play, before he agrees to the pact with Lucifer, Faustus is full of ideas for how to use the power that he seeks. He imagines piling up great wealth, but he also aspires to plumb the mysteries of the universe and to remake the map of Europe. Though they may not be entirely admirable, these plans are ambitious and inspire awe, if not sympathy. They lend a grandeur to Faustus's schemes and make his quest for personal power seem almost heroic, a sense that is reinforced by the eloquence of his early soliloquies. Once Faustus actually gains the practically limitless power that he so desires, however, his horizons seem to narrow. Everything is possible to him, but his ambition is somehow sapped. Instead of the grand designs that he contemplates early on, he contents himself with performing conjuring tricks for kings and noblemen and takes a strange delight in using his magic to play practical jokes on simple folks. ...read more.

They do not reappear, but in Scene 13, an enigmatic "Old Man" materializes in Faustus' study to deliver a message similar to that which the "Good Angel" offered. How do you explain what Marlowe was doing with those three allegorical characters, and how might that be compared with those Lucifer causes to appear to Faustus? The technique is purely a distraction from what we know to be Faustus's fate from the Chorus- damnation. It reinforces the idea that Faustus has no real power, as we know he will always despair in relation to God and provides support for text as a morality play, showing only the choices Faustus could've made. How do they relate to Alexander and His Paramour, and "Helen of Greece," herself perhaps the most well known Elizabethan character who never spoke a line, due to Faustus' famous apostrophe to her (13: 81-100)? Are those characters somewhere between allegory and "round" characters? How would you explain their function in the play? Symbols: Blood- Blood plays multiple symbolic roles in the play. When Faustus signs away his soul, he signs in blood, symbolizing the permanent and supernatural nature of this pact. His blood congeals on the page, however, symbolizing, perhaps, his own body's revolt against what he intends to do. Meanwhile, Christ's blood, which Faustus says he sees running across the sky during his terrible last night, symbolizes the sacrifice that Jesus, according to Christian belief, made on the cross; this sacrifice opened the way for humankind to repent its sins and be saved. Faustus, of course, in his proud folly, fails to take this path to salvation. Faustus's Rejection of the Ancient Authorities- In scene 1, Faustus goes through a list of the major fields of human knowledge-logic, medicine, law, and theology-and cites for each an ancient authority (Aristotle, Galen, Justinian, and Jerome's Bible, respectively). He then rejects all of these figures in favour of magic. ...read more.

They recruit a native army to support their rule, which is cemented by native acceptance of their superiority: they are seen as gods connected with poorly remembered Masonic rituals. Note that Dravot refuses to eat until the food is offered by the most senior men (p. 170), thereby establishing his place at the very top of the hierarchy. Their rule is not all bad - as the British did in India, they put an end to intertribal warfare in a kind of Pax Dravotiana. Also see that Dravot remains a patriotic Brit throughout, even though British society has no real place for him. He proposes to conquer an empire and then turn it over as a gift to Queen Victoria (p. 178) -- reflecting a delusion of grandeur perhaps rooted in his own sense of being at the bottom of British society? Phillip Mallett ("Kipling and the Hoax" in Mallett, Kipling Considered (1989)) says that Kipling draws attention to the assumption that whites will inevitably rise to power over non-whites, showing the falseness of the assumption. But Kipling ultimately evades the general question: There is no suggestion that the claim to power is itself "inherently fraudulent," as Mallett argues (103). Rather, Kipling suggests that Daniel's error is that he forgot himself by overreaching, thus exposing himself to defeat. Story of Friendship Context: Faustus: TMWWBK: Law: The idea of law is expressed at beginning ("The Law. . . lays down a fair conduct of life. . ."), and used in various ways. At one level is the common law of Great Britain. The English tended to see themselves as bringing law and order to the chaos of warring native peoples; English law is characterized as benign, native law as cruel. Note this in relation to the Pax Dravotiana, in which justice appears (at least in Peachey's telling) to be fairly and benignly administered, and to the ultimate disposition of Dravot, Carnehan, and Billy Fish - murdered, mutilated, or crucified. ...read more.