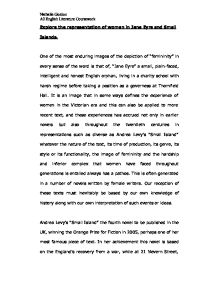 Explore the representation of women in Jane Eyre and Small Islands

Explore the representation of women in Jane Eyre and Small Islands. One of the most enduring images of the depiction of "femininity" in every sense of the word is that of, "Jane Eyre" a small, plain-faced, intelligent and honest English orphan, living in a charity school with harsh regime before taking a position as a governess at Thornfield Hall. It is an image that in some ways defines the experience of women in the Victorian era and this can also be applied to more recent text, and these experiences has accrued not only in earlier novels but also throughout the twentieth centuries in representations such as diverse as Andrea Levy's "Small Island" whatever the nature of the text, its time of production, its genre, its style or its functionality, the image of femininity and the hardship and inferior complex that women have faced throughout generations is entailed always has a pathos. This is often generated in a number of novels written by female writers. Our reception of these texts must inevitably be based by our own knowledge of history along with our own interpretation of such events or ideas. Andrea Levy's "Small Island" the fourth novel to be published in the UK, winning the Orange Prize for Fiction in 2005, perhaps one of her most famous piece of text. In her achievement this novel is based on the England's recovery from a war, while at 21 Nevern Street, London the conflict is ongoing as Levy switches between four protagonists. ...read more.

To an extent that it cannot be a "real" as other text written by Caribbean writers who had first hand of experience of the arrival of immigrations to a forieng country most importantly the effects it had upon women. In this way "Small Island" must be judged alongside other novels such as Zadie Smith's "white teeth" and Nancy Horan's "Loving Frank" other novels written in the twentieth century, novels partly responsible for sustaining the interest in the rise of women compare to the struggles that they faced. This is often of an independent, educated woman at odds with restriction of the early twentieth century and introducing a new generation to experiences and issues of the time. Such novels written from a more distant perspective tend to be more cynical about the causes and the illustration of women and like much later twentieth century fiction are concerned with the psychological realism of their characters. Levy's novels are slightly different in that through her choice of such high profile changes to the English and Caribbean society as she is offering more insight into the production of important events of that period, whether it is on a larger scale or the small steps that women made towards change. Clearly because the novel is written from a number of protagonists, it does not mean it does not have any "real" insight into the representation of women. In this quote, we can identify various stylistic features particular to the context of its production that influences this reading experience of the progression of women. ...read more.

As a woman in Victorian society she challenged social order by taking on roles that would have been dominated by men. This would have been "shrew" like behaviour as Jane Challenged social order. No character can be seen as good or bad, for example when Hortense looks with disregard upon the dreary women she sees on the streets of London she forgets that women have been through the war and are still not able to buy new clothes much less shelter themselves. Likewise when Bernard complains about Queenie taking a job, he demonstrates that he has no understanding of Queenie's disappointment at not having a child but more realistically this shows that he's not used to the idea of women being in the workforce. To conclude, it is clear that there are many issues that affect a reader's reception of a text whether it is genre, the form, structure and language employed, whether it is fiction or non-fiction, the time it was written in, and the attitudes to the writer's subject. Perhaps what is parallel to the text is the purpose. A desire to report truth about what happened and the consideration of the limits of fiction. Each piece conveys the writer's careful consideration to society and how changed as women battles to fit in whilst conforming at the same time. In this the representation of women and how important they are to society is made anew through these texts. Reference Class notes on Gilbert, Hortense and Queenie http://www.andrealevy.co.uk/eca4-1.html Andrea Levy, Small Island Charlotte Bronte, Jane Eyre ?? ?? ?? ?? Nathalie Gordon A2 English Literature Coursework ...read more.