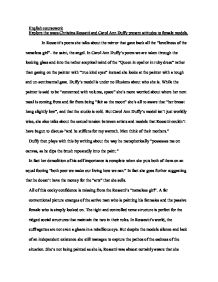 English coursework Explore the ways Christina Rossetti and Carol Ann Duffy present attitudes to female models. In Rossetti's poem she talks about the mirror that gave back all the "loveliness of the nameless girl"- the saint, the angel. In Carol Ann Duffy's poem we are taken through the looking glass and into the rather sceptical mind of the "Queen in opal or in ruby dress" rather than gazing on the painter with "true kind eyes" instead she looks at the painter with a tough and un-sentimental gaze. Duffy's model is under no illusions about who she is. While the painter is said to be "concerned with volume, space" she's more worried about where her next meal is coming from and far from being "fair as the moon" she's all to aware that "her breast hang slightly low", and that the studio is cold. ...read more.

In fact her demolition of his self importance is complete when she puts both of them on an equal footing "both poor we make our living how we can." In fact she goes further suggesting that he doesn't have the money for the "arts" that she sells. All of this cocky confidence is missing from the Rossetti's "nameless girl". A far conventional picture emerges of the active man who is painting his fantasies and the passive female who is simply looked on. The tight and controlled verse structure is perfect for the ridged social structures that maintain the two in their roles. In Rossestti's world, the suffragettes are not even a gleam in a rebellious eye. ...read more.

This says that even when he has finished the painting the girl is all he thinks about it; is an obsession. He wants a fantasy woman and his painting; his interpretation is the closest he can get. The last two lines give you the impression of a deluded man who sees the model and he wants- she is a figure of his imagination. Carol Ann Duffy's poem gives the impression of a backstreet studio, where anything could happen, the enjambments help to make the poem seem a lot less uptight like Rossetti's which is very controlled and disciplined. I see it as an under covered way of showing how disciplined life was like for the Victorian women and how they were just supposed to be seen and not heard. Just like the structure of the poem the finished canvases were perfect but not realistic. ...read more.