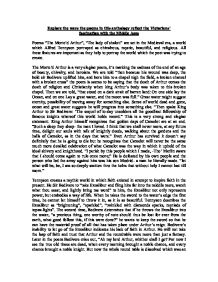 Explore the ways the poems in this anthology reflect the Victorians' fascination with the Middle Ages Poems "The Morte'd Arthur", "The lady of shalott" are set in the Medieval era, a world which Alfred Tennyson portrayed as chivalrous, mystic, beautiful, and religious. All these features are important as they help to portray the world which the poet was trying to create. The Morte'd Arthur is a very elegiac poem, it's marking the sadness of the end of an age of beauty, chivalry, and heroism. We are told "then because his wound was deep, the bold sir Bedivere uplifted him, and bore him to a chapel nigh the field, a broken chancel with a broken cross" the poem is seems to be saying that the death of Arthur comes the death of religion and Christianity when king Arthur's body was taken to this broken chapel. Then we are told, "that stood on a dark strait of barren land: On one side lay the Ocean, and on one Lay a great water, and the moon was full." Great water might suggest eternity, possibility of moving away for something else. ...read more.

The second time, Bedivere determines that if he throws the Excalibur into the water, "a precious thing, one worthy of note should thus be lost for ever from the earth, what good follow this, if this were done?" he wants to keep the sword so that he can have the material proof of all that has taken place under Arthur's reign. Bedivere's inability to let go of the Excalibur indicates his lack of faith in Arthur. He will not take the leap of faith and trust that Arthur and the roundtable were more than just a fantasy. Later in the poem Bedivere cries out, "Ah my lord Arthur, whither shall I go? For now I see the true old times are dead, when every morning brought a noble chance, and every chance brought a noble knight. But now the whole round table is dissolved which was an image of the mighty world." The world that Bedivere knows is falling apart. Bedivere does not know how to believe in a world without Arthur, for Arthur has been his faith. For people in Victorian times, King Arthur was a symbol, of Christ and Christianity, of human beings and humanity. ...read more.

People looked at her with fear, except sir lancelott. We see knightly shivery from him as this is reflected from his response to lady of shalott. The image on his shield shows a Red Cross knight kneeling to a lady; the shield was the demonstration that he is both a Christian knight and also a knight that extends courtesy and grace to ladies. Stanza III focuses on one particular knight who captures the Lady's attention: Sir Lancelot. This dazzling knight is the hero of the King Arthur stories, famous for his illicit affair with the beautiful Queen Guinevere. He is described in an array of colours: he is a "red-cross knight"; his shield "sparkled on the yellow field"; he wears a "silver bugle"; he passes through "blue unclouded weather" and the "purple night," and he has "coal-black curls." The moment the Lady sets herself aside to look upon Lancelot, she is seized with death. Tennyson was very fascinated with the Medieval world as both his poems "Morte'd Arthur" and "The Lady of Shallot" portray the medieval period as a gallant, spiritual and dream like place. "Morte'd Arthur" emphasises more on the religion, and "The Lady of Shallot" stresses on the contrast between the fairy tale world of Shallot and the busy thriving world of Camelot. ...read more.