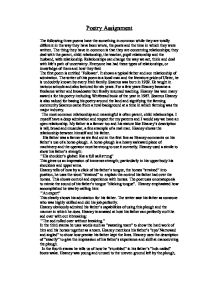 'Follower' by Seamus Heaney, 'Last Lesson of the Afternoon' By D.H. Lawrence and 'My Last Duchess' by Robert Browning

Poetry Assignment The following three poems have the something in common while they are totally different in the way they have been wrote, the poets and the time in which they were written. The thing they have in common is that they are concerning relationships; they deal with the parent, child relationship, the teacher, pupil relationship and the husband, wife relationship. Relationships can change the way we act, think and deal with life's path of uncertainty. Everyone has had these types of relationships, or knowledge of them and how they feel. The first poem is entitled 'Follower'. It shows a typical father and son relationship of admiration. The writer of this poem is a local man and the literature pride of Ulster, he is undoubtly known by every Irish family. Seamus was born in 1939. He taught in various schools and also lectured for six years. For a few years Heaney became a freelance writer and broadcaster but finally resumed teaching. Heaney has won many award s for his poetry including Whitbread book of the year in 1987. Seamus Heaney is also valued for basing his poetry around the land and signifying the farming community Seamus came from a rural background at a time in which farming was the major industry. The most common relationship and meaningful is often parent, child relationships. I myself have a deep admiration and respect for my parents and I would say we have an open relationship. My father is a farmer too and his stature like Heaney's description is tall, broad and muscular, a fine example of a real man. Heaney shows the relationship between himself and his father. His father was a farmer as we find out in the first line as Heaney comments on his father's use of a horse-plough. A horse-plough is a heavy awkward piece of machinery and the operator must be strong to use it correctly. ...read more.

The writer feels unwilling to quarrel with the pupils any more as he feels it's like banging their heads of the walls of each other, pointless on both sides. He feels they are like a wall as they cannot be urged to learn and he can't move or go around them. While to the pupils he is like a wall standing between them and freedom. In the last stanza the writer uses the image of a wall to explain the relationship between him and his pupils: "Why should we beat our heads against the wall Of each other?" To the teacher the children represent a wall for him. A wall is impenetrable, strong and stubborn. The pupils are stubborn like a wall and refuse to be taught; they have no desire for knowledge and resist cooperating with the teacher. The teacher represents a wall to them as a barrier that stands between them and freedom and one which they are unable to get around or over. The speaker may not fully understand his pupil's backgrounds or why they refuse to learn. His only resort is to sit and wait for the bell to free him of this cage. We see the negative attitude of not only the writer but the pupil also. The children give the impression of not wanting to learn and therefore they don't. The speaker understands that he is expected to care about the work of his pupils yet has had enough of their indifference and now is keeping what energy and strength left within him for himself. Throughout the poem the poet uses questions for example "What is the point of this teaching of mine, and of this Learning of theirs?" The teacher is questioning the intellect of the pupils that don't wish to be educated. There is also an underlying sense of futility running through the poem. The teacher feels that the teaching of his and the learning of theirs disappears into the same "abyss" the same black hole. ...read more.

The Duke obviously likes acquiring works of art. We get the feeling the poet despised characters like the Duke, domestic tyrants, Browning satirized domestic tyrants. His father-in-law was a character like the Duke this made Browning elope with his love, the poet had little personal experience of this only for his account of his father-in-law. In his longest poem 'The Ring and the Book' he again delves into the character of another domestic tyrant that just like in this poem was aggravated by his wife. This poem unlike a lot of other poems like 'Follower' and 'Last lesson of the afternoon' is not divided into stanzas; the poem is a continuous flow of the Dukes thoughts and speech. The fact that they are uninterrupted shows just how arrogant the Duke is and how he adores the sound of his own voice, he's self obsessed. The Duke fails to care what other people think as he tells the emissary: "Then all the smiles stopped together." The Duke is very narrow minded. The poem is written using rhyming couplets this gives a formal mood to the piece. We can see a contrast between the Duke's cold nature and the Duchess's warm nature. I feel the Duke if he was dealing with today's society would not get away with his opinions and actions. The Duchess was far out of his league and he felt once she said "I do" she was his. He couldn't have been more wrong, he couldn't tame her warm embracive qualities and this made him jealous as he wanted her for himself. I feel this is totally immoral as the Duchess was a human being with independence yet had a need for interaction with other people and the Duke hated what had once probably drawn her to him. This is a very satirical poem. The poet gives a very detailed description of a Renaissance nobleman a period spanning from the 14th century to the 16th century. In this period art, literature and architecture rejuvenated the form of classical Greece and Rome. ...read more.