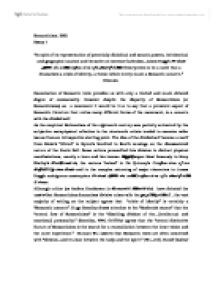 Romanticism. EN2 Essay I "In spite of its representation of potentially diabolical and satanic powers, its historical and geographic location and its satire on extreme Calvinism, James Hogg's Private Memoirs and Confessions of a Justified Sinner proves to be a novel that a dramatises a crisis of identity, a theme which is very much a Romantic concern." Discuss. Examination of Romantic texts provides us with only a limited and much debated degree of commonality. However despite the disparity of Romanticism (or Romanticisms) as a movement it would be true to say that a prevalent aspect of Romantic literature that unites many different forms of the movement, is a concern with the divided self. As the empirical Rationalism of the eighteenth century was partially subverted by the subjective metaphysical reflection in the nineteenth artists tended to examine wider issues from an introspective starting point. The idea of the divided self became a motif from Blake's "Albion" to Byron's Manfred to Keat's musings on the disassociated nature of the Poetic Self. Some writers personified this division in distinct physical manifestations, usually a hero and his inverse doppelganger. Most famously in Mary Shelley's Frankenstein, the various "selves" in De Quincey's Confessions of an English Opium Eater and in the complex mirroring of major characters in James Hogg's ambiguous masterpiece Private Memoirs and Confessions of a Justified Sinner. Although critics (as Andrea Henderson in Romantic Identities) have debated the extent that Romanticism dramatises divisive crises with the psychological self , the vast majority of writing on the subject agrees that "crisis of identity" is certainly a "Romantic concern". Hugo Donelley draws attention to the "Modernist stance" that the "central flow of Romanticism" is the "disabling division of the...[intellectual and emotional] personality." (Donelley, 484). Griffiths agrees that the "central distinctive feature of Romanticism is the search for a reconciliation between the inner vision and the outer experience." Duncan Wu asserts that Romantic texts are often concerned with "division..and reunion between the body and the spirit." ...read more.

(Gifford, 109). His analysis sounds like Gilmartin is Wringhim's "Id", Freud's term for the unrepressed carnality in human nature. The Id is in conflict with the repressively moral "Superego" and the two are balanced within the realm of the"Ego" which could be seen as being represented by the Robert the Justified Sinner and George respectively.1 It seems that Robert is controlled by physical externalisations of two opposing fragments of himself (Gilmartin and George), his Id and Ego. He becomes prey to this very distinct split in his identity after Wringhim Senior dedicates him a blood spilling "sword and scourge" and exonerates him from all evil. Ultimately Robert himself is peripheral to the warring factions in his identity crisis. " I generally conceived myself to be two people....I rarely conceived myself to be any of the two persons..my companion was one of them and my brother the other." Gilmartin assumes the hate-filled spiritual side (piety for Robert is defined in terms of "hatred", "battle" and "scourge") and George the joyous sensual aspect. This conflict occurs outside of the sinner himself. Gilmartin who makes Robert a passive agent to his malefic will dominates him. Such a perceived loss of control over one's life, whether caused by a externalised projection of the Id or the palpable presence of a devil, unsurprisingly causes him to feel abstracted from his own self and identity even further. He has the "singular delusion that I was two persons.." neither of which was himself, "my companion [Gilmartin] was one of them and my brother [George] the other. When Robert is provoked to murder George it is as if his Id as consumed his Ego. Now he hasn't even a precarious psychological balance only extremes of personality which appear to be incompatible. Robert claims to have a "second self...of whose action my own soul was wholly unconscious...one half or two-thirds of the time." (Hogg, 182). He may be actually committing crimes (like the seduction and murder of a young girl in his demesne) ...read more.

Although ultimately the book it ambiguous and does not provide any definitive resolution regarding he rational/tradition or psychological/diabolical debates. If taken purely as a Gothic novel in vein of Caleb Williams it is more about the persecution of one man by another. If we employ a psychological reading it becomes more about one man's crisis of identity. However both possible themes were as much a concern of Hogg himself (reiterated throughout his corpus of work) as of Romanticism in general. Both readings still represent, to different degrees, a crisis of identity either through personality fragmentation or demonic possession. Hogg consistently hints at a solution to the crisis, one that the smug editor and the suffering Wringhim completely overlook. He implies that psychological harmony can only result from generosity and the elimination of feelings of guilt. George Colwan compromised his identity by acting against his nature and striking his brother. in "a flush of anger glowed in his ..face and flashed from his ..eye, but it was a stranger to both" (Hogg,22). From then on he becomes worried, lonely and followed "as if by a demon [attending] some devoted being that had sold himself to destruction." Like his brother he now has a demonic, physical manifestation of his unruly Id. When he holds out the hand of fraternity to his undeserving brother he is harmonised with nature (arguably the Romantic ideal) and is even given a "bright halo in the cloud of haze" (Hogg, 30). However Robert is constantly burdened by the guilt of hi s countless perceived sins: "I was utterly confounded at the multitude of my transgressions....150,000 a minute." Robert himself is "deeply affected" by the generosity of the rural peasants he meets on his flight from the law. The more good will he encounters the more he is humbled and becomes an increasingly sympathetic character. Maybe Hogg is saying a simple, apolitical, transreligious kindness is the ultimate adherent for unifying the soul. This maxim certainly would appeal to Romantic sensibilities. One feels that Wordsworth would be proud. G. Gulati. 2001. ...read more.