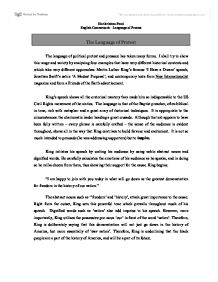 The Language of Protest

The Language of Protest The language of political protest and pressure has taken many forms. I shall try to show this range and variety by analyzing four examples that have very different historical contexts and which take very different approaches: Martin Luther King's famous `I Have a Dream' speech; Jonathan Swift's satire `A Modest Proposal'; and contemporary tests from New Internationalist magazine and from a Friends of the Earth advertisement. King's speech shows all the oratorical mastery than made him so indispensable to the US Civil Rights movement of the sixties. The language is that of the Baptist preacher, often biblical in tone, rich with metaphor and a great array of rhetorical techniques. It is appropriate to the circumstances: the charismatic leader heading a great crusade. Although the text appears to have been fully written - every phrase is carefully crafted - the sense of the audience is evident throughout, above all in the way that King contrives to build fervour and excitement. It is not so much intended to persuade (he was addressing supporters) but to inspire. King initiates his speech by uniting his audience by using noble abstract nouns and dignified words. He carefully calculates the emotions of his audience as he speaks, and in doing so he milks cheers from them, thus showing their support for the cause. King begins: "I am happy to join with you today in what will go down as the greatest demonstration for freedom in the history of our nation." The abstract nouns such as `'freedom' and `history', attach great importance to the cause. Right from the outset, King sets this powerful tone which prevails throughout much of his speech. Dignified words such as `nation' also add impetus to his speech. However, more importantly, King utilizes the possessive pro-noun `our' in front of the word `nation'. Therefore, King is deliberately saying that this demonstration will not just go down in the history of America, but more essentially of `our nation'. ...read more.

Unlike King's speech, `A Modest Proposal' there is only one tone throughout the passage. Swift amusingly his target by the parody of political and economical language. One of these targets was the economists. Swift uses this language when he is calculating the number of children that can be used for food in Ireland. He deliberately de-humanises people, with his attention to figures and facts. As Swift uses sound mathematical reasoning to justify his claims, the poor people loose their humanity and become facts and figures. Swift is using the force of satire, which makes his argument seem reasonable. Swift writes, "The number of souls in this kingdom being usually reckoned one million and a half, of these I calculate there may be about two hundred thousand couples whose wives are breeders; from which I subtract thirty thousand couples who are able to maintain their own children... there will remain and hundred and seventy thousand breeders. I again subtract fifty thousand for those women who miscarry, or whose children die by accident or disease within the year." The effect of using this language is to label the poor as useless and therefore Swift proposes to use the poor as an economic resource i.e. to feed the rich. By doing so, the two main problems of famine and overpopulation can be resolved. Thus, Swift is having fun at the expense of economists. He maybe directly referring to the famous economist called Malthus. Malthus said that populations grow geometrically, whereas food supply only grows arithmetically, and therefore, the supply of food in the world will one day be insufficient to feed the population. Regardless of whether Malthus' theory is true or not, Swift may not have liked it because it sounds very de-humanising and this is a characteristic flaw in the way economists generally talk. Furthermore, throughout the proposal, there are two languages in progress. There is a moral one. ...read more.

It was the timber cutter, Oscar Branco, with 16 hired gunmen. Te men got out and shouted that they had come to kill everyone. They started firing... Fourteen Indians, including children were killed. Twenty-two more were injured... Everyone knew who the killers were... Yet four years have passed and no one has been prosecuted. Those Indians and their children - their deaths didn't count." In addition to the short sentences, all of what we read is just factual. The narrator doesn't on any occasion reveal to us his or her feelings to what has happened. The narrator simply tells us the incidents that occurred. Therefore, the reader is expected to react independently to what read. Therefore, reaction to the cruelty of the gunmen from the reader, and not the narrator, making it more effective. In the concluding the section, the narrator intensifies her story by blaming the reader for what has happened. From being an ill - informed audience, the reader becomes a secondary oppressor to the woodcutters. The narrator uses extremely strong language to evoke a sense of guilt in the reader so that the reader would help. It states: "Your greed for mahogany. You in Britain buy more then half the mahogany Brazil produces. Look! That deep red glow in your mahogany dinner table is the blood of murdered Indians. Listen! The clatter of your mahogany luxuries is the gunfire that killed Indian children" It is very forceful language. It ties together common images such as the `dinner table' with the `blood' and dead children. It finishes by demanding help and uses repetition in the conclusion where it states, `Please join us. Please do it now.' Therefore, by bringing the reader into the situation, the narration hopes to make the reader feel that they have a responsibility to help as they own mahogany goods. Constantly, throughout the piece, the tone switches. It begins as informative by telling us about the mahogany trees and the wood-cutters. It then becomes very factual and concludes with forceful language and an emotive plea. ...read more.