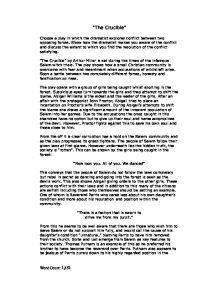 "The Crucible" Choose a play in which the dramatist explores conflict between two opposing forces. Show how the dramatist makes you aware of the conflict and discuss the extent to which you find the resolution of the conflict satisfying. "The Crucible" by Arthur Miller is set during the times of the infamous Salem witch trials. The play shows how a small Christian community is overcome with fear and resentment when accusations of witchcraft arise. Soon a battle between two completely different forces, honesty and falsification up rises. The play opens with a group of girls being caught whilst sporting in the forest. Suspicious eyes turn towards the girls and they attempt to shift the blame. Abigail Williams is the eldest and the leader of the girls. After an affair with the protagonist John Proctor, Abigail tries to place an incantation on Proctor's wife Elizabeth. During Abigail's attempts to shift the blame she draws a significant amount of the innocent population of Salem into her games. Due to the accusations the ones caught in this shambles have no option but to give up their soul and name accomplices of the devil. However, Proctor fights against this to save his own soul and those close to him. From the off it is clear corruption has a hold on the Salem community and as the play progresses its grasp tightens. The people of Salem follow their given laws at first glance. However underneath lies the hidden truth, the society is "rotten". ...read more.

The beginnings of this can be seen in Act one when Abigail says: "Let either of you breathe a word, or the edge of a word, about the other things, and I will come at you in the black of some terrible night and I will bring a pointy reckoning that will shudder you." Here the reader can see the hold Abigail has over the other girls. She knows she can manipulate them and she uses this to her advantage. It also shows that she is a liar, and wants the other girls to lie too. She needs them to do this so they stay out of trouble but most importantly to make sure she does not get in to trouble. Abigail knows that if the truth was exposed her reputation would be tarnished. This is what defines the difference between Abigail and Proctor. Proctor is not afraid to tarnish his reputation as long as he is true to himself. In act one while Proctor is in Parris' house he says: "I mean it solemnly, Rebecca; I like not the smell of this 'authority'" This tells the reader that he does not like who is in authority and he is currently against the church due to the recent events as the reverends' daughter and niece are involved, this also demonstrates how Proctor believes Parris is greedy and selfish. Furthermore, in act two the reader can see how Proctor goes on about what is driving the population of Salem: "I'll tell you what's walking Salem - vengeance is walking Salem. ...read more.

However, the judges want it pinned up to show that even the strongest of the accused can be broken. Proctor then changes his mind and tears up the confession as he will not lose his integrity: "for now I do just see some shred of goodness in John Proctor. Not enough to weave a banner with, but white enough to keep it from such dogs." Proctor has made his final decision and signs his life to the rope. He then asks for his wife's forgiveness. Goody Proctor is then asked to try and persuade him to re-sign the confession but she replies with: "He have his goodness now. God forbid I take it from him!" This conveys that Goody Proctor has finally forgiven him for the sins he has committed. Also she denies to persuade him. In conclusion Proctor managed to retain his integrity after the battle to safe his wife and the battle to prove Abigail is not as innocent as everyone seems to think. During the play the integrity of Proctor becomes more apparent as it progresses. To begin with, the reader finds out that Proctor is a calm and collected man but finds his true private life becomes clear. He stands up to the corrupt in Salem as they drag him into their downward spiral, but in the end has to sacrifice himself to keep his name from being blackened. The play's main message is that one cannot betray another without suffering the consequences. ?? ?? ?? ?? Word Count: 1,852 ...read more.