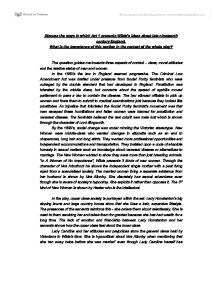 Discuss the ways in which Act 1 presents Wilde's ideas about late nineteenth century England. What is the importance of this section in the context of the whole play? The question guides me towards three aspects of context - class, moral attitudes and the relative status of men and women. In the 1880's the law in England seemed progressive. The Criminal Law Amendment Act was drafted under pressure from Social Purity feminists who were outraged by the double standard that had developed in England. Prostitution was tolerated by the middle class, but concerns about the spread of syphilis moved parliament to pass a law to contain the disease. The law allowed officials to pick up women and force them to submit to medical examinations just because they looked like prostitutes. An injustice that infuriated the Social Purity feminist's movement was that men escaped these humiliations and fallen women were blamed for prostitution and venereal disease. The feminists believed the real culprit was male l**t which is shown through the character of Lord Illingworth. By the 1890's, social change was under minding the Victorian stereotype. New Women were middle-class who wanted changes in etiquette such as an end to chaperones, long hair and long skirts. ...read more.

She and Lord Illingworth have a lot in common which is shown in their 'flowing' conversation of wit. They take pleasure in betting on somebody's downfall and this shows the breakdown of morality. Another scene that shows the lack of morals Mrs Allonby has is the way she makes Lady Stutfield feel small about the country lifestyle. 'But somehow, I feel sure that if I lived in the country for six months, I would become so unsophisticated that no one would take the slightest notice of me.' Her statement about playing with fire makes it clear she disregards morality and relishes in immorality. Lady Caroline's conversation with Kelvil shows another character being hypocritical. He criticises Lord Illingworth for regarding women 'simply as a toy'. He expresses views that women are the 'intellectual helpmeet of a man in public as in private life'. However when Lady Caroline questions his married status, the audience learn that despite Kelvil's views, he chooses his public engagements with upper class people over a trip to the seaside with his wife and children. He is a puritan hypocrite who allowances can be made for because he is a politician. The characters respond to Kelvil's conventional Victorian values with politeness and kindness. ...read more.

Lady Caroline's bossy nature is shown in the way she makes Sir John put on his muffler in the first Act. Sir John does as he is told but proceeds to correct her every time she says Mr Kelvil's name wrongly. He does this to subtly appear more intelligent and superior to her even though she doesn't acknowledge his correction. Another relationship Wilde uses to show conventional Victorian attitudes is Mrs Allonby and Lord Illingworth's. They share a bond because they understand each other. They have secrets which reinforces the theme of masks in the play. Wilde uses their relationship to show even people who share strong bonds have secrets. Their conversation is of their opposing views on if Lord Illingworth is attracted to Hester or not. Lord Illingworth and Allonby have a flirtatious conversation which leads the audience to question whether or not they had a previous relationship. They share a healthy, balanced bond whereas Lady Caroline and Sir John have a one sided relationship because of her dominance. Lord Illingworth and Allonby can be compared to Gerald and Hester. As stated before, their relationship is based on equality. Act 1 prepares us for the rest of the play because it makes the audience aware of the difference characters and their opinions on social class. We are shown some of the most important relationships within the play such as Hester and Gerald. ...read more.