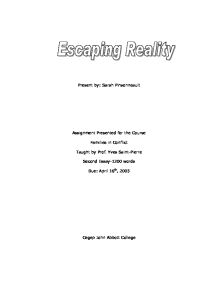 Present by: Sarah Pinsonneault Assignment Presented for the Course Families in Conflict Taught by Prof. Yves Saint-Pierre Second Essay-1200 words Due: April 16th, 2003 Cegep John Abbott College The passage that I have chosen starts on the bottom of page 170 and ends at the top of page 173. Tyrone In a low voice. Thank God he's asleep. Edmund looks up with a start. I thought he'd never stop talking. ... ... Tyrone Heavily. I wish to God she'd go to bed so that I could, too. Drowsily. I'm dog tired. I can't stay up all night like I used to. Getting old- old and finished. With a bone-cracking yawn. Can't keep my eyes open. I think I'll catch a few winks. Why don't you do the same, Edmund? It'll pass the time until she- In Eugene O'Neill's play, Long Day's Journey into Night, he turns reality into fiction in that he creates his dramatic characters, the Tyrone family, based on his own family and the events of one summer in 1912. This reality, however, is not promising, and most people would prefer not to have to go through it, nor does this family want to face all the troubles in their lives. In Long Day's Journey into Night, each of the four members of the Tyrone family attempts to escape from reality in their own ways. Through the use of one of the passages in this play I will demonstrate some of the ways the characters in this play try to escape their own reality. ...read more.

Mary, before completely relying on the morphine to create a new world for her in her head, finds an escape in the fog outside. Upon hearing a foghorn in the distance, Mary tells the maid Cathleen, "I really love fog ... it hides you from the world and the world from you... It's the foghorn that I hate. It won't let you alone. It keeps reminding you, and calling you back" (O'Neill 101). Mary wants to disappear into the fog; she wants to go where suffering cannot touch her. However, the foghorn, or reality, will not allow her to leave. Mary mentions this in Act III... "But it can't tonight. It's just an ugly sound. It doesn't remind me of anything" (O'Neill 101). Mary is reduced to returning to her morphine addiction, a place she knows will hide her from life. She suddenly develops a detached and impersonal manner during a conversation with Edmund and Jamie, a characteristic behavior of her return to the drug. Mary tries to rationalize her situation and that of her family when she says, "None of us can help the things life has done to us"(O'Neill 63). In telling herself that there is nothing humanly possible that can be done to change her life, which it all rests on fate, she is refusing to accept the fact that she might be able to help herself and her family in any way. ...read more.

Jamie also blocks out the real world by going to prostitutes for solace, while Edmund tries to lose himself in the fog. Mary also wants to disappear into the fog, but uses morphine predominantly to become completely detached. One of the themes of the play is that there is no ways one can avoid dealing with his or her problems and not have it somehow backfire. Even when the characters are convinced that they have succeeded in escaping their lives, they are only fooling themselves. Real life and its problems are always on their minds and there is no way to block out the real world. However, a life without obstacles and challenges really isn't much of a life at all. Therefore, it seems as though the family's entire lives center on trying not to live. Where they "live," or rather, where their address is located, is a perfect example of this. They spend their days in a summer home, not a real house. They've never had a real house because James has to travel so much, being an actor. A summer home is meant for vacation, in other words, escape from the real world for a little while. Only the Tyrone's aren't there for a little while, this is where they want to exist for as long as possible. While it is possible, and even healthy, to leave life behind for a short time, one must go back eventually. As this play illustrates, ignoring issues in one's life can lead to greater problems and conflicts with loved ones. ...read more.