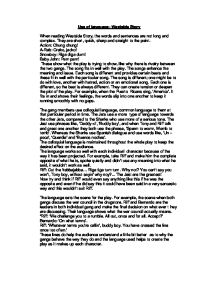 Westside story, Use of language

Use of language- Westside Story When reading Westside Story, the words and sentences are not long and complex. They are short, quick, sharp and straight to the point. Action: Chung chung! A-Rab: Crako, jacko! Snowboy: Riga diga dum! Baby John: Pam pam! These show what the play is trying to show, like why there is rivalry between the two gangs. The song fits in well with the play. The songs enhance the meaning and issue. Each song is different and provides certain beats and these fit in well with the particular song. The song is different; one might be to do with love, another with hatred, action or an emotional song. Each one is different, so the beat is always different. They can create tension or deepen the plot of the play. For example, when the Puerto Ricans sing, 'America'. It fits in and shows their feelings, the words slip into one another to keep it running smoothly with no gaps. The gang members use colloquial language, common language to them at that particular period in time. ...read more.

At the end of act one at the 'rumble' scene Tony screams the word, 'MARIA!!!' This leaves the audience in suspense as to what is going to happen next especially between his relationship between him and Maria. This is different to the way language is used compared to the way Bernardo and Riff talk to each other at the war council at the drugstore. Tony doesn't want the fight to go ahead as he promised Maria and you can tell this by the way he talks and when he screams out Maria's name his voice has changed completely and he has projected his voice much more. He I showing that he is in pain of what just happened. This shows the difference in the way that the language changes throughout the whole play. Each song in the whole play helps the play to develop further. The songs sung by only one character could be seen as a monologue as they are communicating to the audience. The song Tony sings 'Maria'. He sings this towards the audience 'I've just met a girl named Maria'. ...read more.

Tony cannot realise that two lives have been lost through their love, one his best friend and the other Maria's brother. Doc tries his best to tell Tony that him and Maria isn't for the best, this just makes Tony want Maria even more. Doc does not play a key role in the play however he is a major one towards the end and changing the whole direction of the play. Doc thinks he has no choice and tells Tony; Maria has in fact been shot by Chino and now was dead. Shocked by this news, a different form of emotion that hasn't been looked at in great detail is brought into this scene, his love dying away from him and his anger for the person who took it away from him. We now know what Doc told Tony was untrue and we realise what he said and meant was for the best in his eyes. The emotion shown between the characters show exactly how they are feelings and also shows and makes the audience what they are feeling as well, and this is what makes the play such a great success. ...read more.