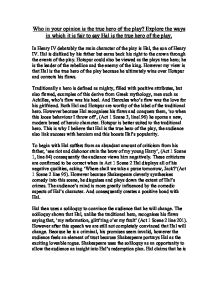 Who in your opinion is the true hero of the play? Explore the ways in which it is fair to say Hal is the true hero of the play. In Henry IV debatably the main character of the play is Hal, the son of Henry IV. Hal is disliked by his father but earns back his right to the crown through the events of the play. Hotspur could also be viewed as the plays true hero; he is the leader of the rebellion and the enemy of the king. However my view is that Hal is the true hero of the play because he ultimately wins over Hotspur and corrects his flaws. Traditionally a hero is defined as mighty, filled with positive attributes, but also flawed, examples of this derive from Greek mythology, men such as Achilles, who's flaw was his heel. And Hercules who's flaw was the love for his girlfriend. Both Hal and Hotspur are worthy of the label of the traditional hero. However because Hal recognises his flaws and conquers them, 'so when this loose behaviour I throw off', (Act 1 Scene 3, line196) he sporns a new, modern breed of heroic character. Hotspur is better suited to the traditional hero. ...read more.

The audience prefers to believe Hal, because subconsciously we want him to succeed. We want Hal to succeed because he has many good qualities and he can detect when to be serious and when to be humorous, he is the opposite of Hotspur in many ways and the audience admires him. During the play Shakespeare switches from a scene involving Hotspur to a scene involving Hal. The two characters have a near equal balance of time with the audience, Shakespeare is creating the illusion that this is fair and that we have the free-will to decide which character we prefer. However Shakespeare uses comedy to attract the audience to Hal, and then he changes Hal, making him sincere and serious at the right time so that the audience has no choice but want Hal to succeed. Because generally success is linked with heroism, the audience wants Hal to be the true hero of the play. Falstaff is a major influence in Hal's life; he is arguably the cause of Hal's criminal conscience. Shakespeare uses Falstaff as a contrast, in order to exemplify Hal's heroic qualities. When Falstaff is around Hal often seems even more heroic. For example whilst Hal fights and defeats Hotspur, Falstaff pretends to be dead, only to resurrect and claim credit for Hotspur's defeat, 'I look to be either Earl or Duke, I can assure you' (Act 5 Scene 4 line 139). ...read more.

This means that any readers that admired Hotspur for being a serious hard-working leader will convert their loyalties to Hal. Towards the end of the play, the king offers Hotspur an exit from the rebellion, Hotspur knows he is going to lose and he continues despite of this, even though his own life is at risk. This could be considered as honourable, Hotspur sticks to his believes throughout, and will even sacrifice his own life for his views. However it could also be argued that this is a stubborn choice, Hotspur is unable to identify his flaws and this is the reason why he cannot be the plays true hero and the reason why he could not win the rebellion. His pride was his flaw and it eventually destroys him. However it could be concluded that Hotspur is the plays true hero as he sticks to his beliefs throughout but is destroyed by his flaws. In conclusion I believe that Hal is the true hero of the play, he recognises and conquers his flaws, he defeats his enemies and he achieves forgiveness for his wrong doings. Hal fits the label of the new modern hero who overcomes their flaws. Written by Jamie Skinner! ...read more.