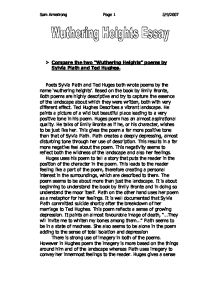 > Compare the two "Wuthering Heights" poems by Sylvia Plath and Ted Hughes. Poets Sylvia Plath and Ted Huges both wrote poems by the name 'wuthering heights'. Based on the book by Emily Bronte, Both poems are highly descriptive and try to capture the essence of the landscape about which they were written, both with very different effect. Ted Hughes Describes a vibrant landscape. He paints a picture of a wild but beautiful place leading to a very positive tone in his poem. Huges poem has an almost aspirational quality. He talks of Emily Bronte as if he, or his character, wishes to be just like her. This gives the poem a far more positive tone than that of Sylvia Plath. Plath creates a deeply depressing, almost disturbing tone through her use of description. This results in a far more negative feel about the poem. This negativity seems to reflect both the wildness of the landscape and also her feelings. ...read more.

Hughes also uses the image of a "crumble of wall" to show how time has passed and the memory of Emily Bronte and her work is being forgotten. Plath uses the image of "the grass is beating its head" as a metaphor for her sense of madness. It seems to be a reference to mentally disturbed people, perhaps reflecting Plath's state of mind. The imageof water "fleeing through my fingers" gives the reader the sense that Plath feels as if she is letting go of life or of sanity. Even the imagery of the sheep is rather disturbing. Plath personifies the sheep giving them a hard almost frightening appearance. "All wig curls and yellow teeth". Both poets use Emily Bronte in their poems. Hughes has a fascination with her and describes her as "a dying prisoner." Plath too uses Emily in her poem. She relates herself to Emily and the image of her being a prisoner. ...read more.

The lines are short giving the poem a quicker pace and give the poem a mad, almost disparate feel. Short sentences in the poem make certain phrases stand out. Emphasising them and helping to add to the feel of depression. "The darkness terrifies it". Ted Hughes and Sylvia Plath both wrote poems that seem to bring to life their thoughts and feelings on the moors. Their use of description is able to create an image in the reader's mind of the surroundings. Plath is able to share her deepest feelings through the poem with her use of imagery as a metaphor for her feelings. Hughes creates a sense of a wild place yet a beautiful one. Although the poems are similar in their use of description to create an effect on the reader, they also differ in the meaning of the poem and the tone of each is very different. Hughes is in awe of Emily Bronte whereas Plath seems to relate to her as she relates to the landscape within the poem, the landscape becoming a metaphor for herself. Sam Armstrong Page 1 5/9/2007 ...read more.