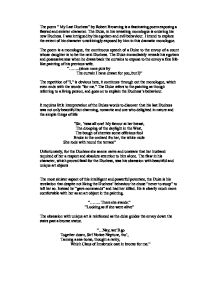 The poem &quot; My Last Duchess&quot; by Robert Browning is a fascinating poem exposing a flawed and sinister character.

The poem " My Last Duchess" by Robert Browning is a fascinating poem exposing a flawed and sinister character. The Duke, in his revealing monologue is ordering his new Duchess. I was intrigued by his egotism and evil behaviour. I intend to explore the extent of his character unwitiningly exposed by him in this dramatic monologue. The poem is a monologue, the continuous speech of a Duke to the envoy of a count whose daughter is to be the next Duchess. The Duke immediately reveals his egotism and possessiveness when he draws back the curtains to expose to the envoy a fine life-like painting of his previous wife. "........(since none puts by The curtain I have drawn for you, but I)" The repetition of "I," is obvious here, it continues through out the monologue, which even ends with the words "for me." ...read more.

Instead he "gave commands" and had her killed. He is clearly much more comfortable with her as an art object in the painting. "........ There she stands." "Looking as if she were alive" The obsession with unique art is reinforced as the duke guides the envoy down the stairs past a bronze statue. "...Nay, we'll go Together down, Sir! Notice Neptune, tho', Taming a sea-horse, thought a rarity, Which Claus of Innsbruck cast in bronze for me." This reference is symbolic. It mirrors the Dukes intention of assuring that the new Duchess will behave exactly as he wishes. Additionally this is one of the elements of action in the poem. Previously the Duke had 'instructed' the envoy to be seated whilst viewing the painting. "Will't please you sit and look at her?" Now he is taking the envoy downstairs. ...read more.

He does not expect to have to correct anything about her behaviour. Robert Browning's stunning, dramatic monologue, "My Last Duchess" is indeed the unintentional revelation of a powerful and murderous tyrant who shows no capacity for love only obsession control of all and everything around him and compulsive need to express himself through unique art objects. I found the Duke's behaviour totally chilling, I was deeply shocked by his revelation that not only he had had his wife killed, but that he could talk about it openly and uses this evil murder as a warning to his next wife. Clearly Browning created a complex and thoroughly sinister character who, despite his cunning revealed aspects of his character which he did not intend to. It is an immensely skilful poem which has convincingly caught my imagination and become embedded in my memory. ...read more.