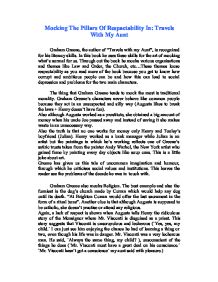 Mocking The Pillars Of Respactability In: Travels With My Aunt

Mocking The Pillars Of Respactability In: Travels With My Aunt Graham Greene, the author of "Travels with my Aunt", is recognized for his literacy skills. In this book he uses these skills for the art of mocking what's normal for us. Through out the book he mocks various organisations and themes like Law and Order, the Church, etc...These themes loose respectability as you read more of the book because you get to know how corrupt and ambitious people can be and how this can lead to social depression and problems for the two main characters. The thing that Graham Greene tends to mock the most is traditional morality. Graham Greene's characters never behave like common people because they act in an unsuspected and silly way (Augusta likes to break the laws + Henry doesn't have fun). ...read more.

The best example and also the funniest is the dog's church made by Curran which would help any dog until its death. "At Brighton Curran would offer the last sacrament in the form of a ritual bone". Another clue is that although Augusta is supposed to be catholic, she doesn't practise or attend any religious. Again, a lack of respect is shown when Augusta tells Henry the ridiculous story of the Monsignor where Mr. Visconti is disguised as a priest. This story suggests that Visconti is unscrupulous and lecherous (`Yes, yes, my child.� I can just see him enjoying the chance he had of learning a thing or two, even though his life was in danger. Mr. Visconti was a very lecherous man. He said, `Always the same thing, my child? ...read more.

� It was almost as though my aunt were speaking through me". A more clear example, which shows that Graham mocks law, is when aunt Augusta tells Henry that Wordswoth worked as a loader and during his working hours he stole gold, diamonds and money from the passenger's luggage. This shows how corruption can appear in every place without prevention. Another example is when Augusta plans how to pass the red bag throudgh the customs at Heathrow and how easily she does this. Greene mocks also traditional male and female roles. Normally the man tends to help the woman but Greene doesn't express any acceptance towards this, because Augusta is trying to obtain some money in order to give to Mr. Visconti. Again this lack of respect is shown when Tooley and Henry meet in the Orient Express: Although Tooley is younger she is sexually active while Henry is older and is still virgin. ...read more.