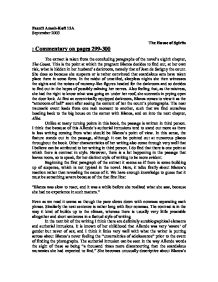 Paanii Ansah-Kofi 12A September 2003 The House of Spirits : Commentary on pages 299-300 The extract is taken from the concluding paragraphs of the novel's eighth chapter, The Count. This is the point at which the pregnant Blanca decides to find out, at her own risk, what is hidden in her husband's darkroom, namely that of Jean de Satigny the count. She does so because she suspects or is rather convinced that scandalous acts have taken place there in some form. In the midst of unsettled, sleepless nights she then witnesses the sights and the noises of mummy-like figures headed for the darkroom and so decides to find out in the hopes of possibly calming her nerves. Also feeling that, as the mistress, she had the right to know what was going on under her roof, she succeeds in prying open the door lock. At first an eccentrically equipped darkroom, Blanca comes to view it as the "anteroom of hell" soon after seeing the content of her the count's photographs. ...read more.

The contrast is in the way it kind of builds up to the climax, whereas there is usually very little preamble altogether and short sentences in a factual style of writing. In the next bit of the writing I think there are definitely autobiographical elements and authorial intrusions. It is known of her childhood that Allende was very 'aware' of gender but never of sex, and I think it links very well with what the writer is putting across about Blanca's never feeling the "uncertainties of adolescence" prior to the event of finding the photographs. The authorial intrusion can be seen in the way Allende words the sight of these as being "a thousand times more disconcerting than the scandalous mummies she had expected to find." She becomes unusually descriptive about Blanca's feelings toward what she is seeing to an extent that one senses the input or expression of her own personal experience. The next two paragraphs show a contrast to the first in that there is a very direct, straightforward use of language where the cause of Blanca's shock is finally described, along with more of her reaction. ...read more.

In it we basically begin and end with Blanca seated on a bench, probably on the platform of the train station. The tone seems suddenly much less dramatic. Although not much of the scenery is described, there is also a really quiet feel to it. This particularly true for the end where we are left on this note: "She gritted her teeth and waited." I believe this device does well to conclude things in some way, although Blanca finds herself at a crisis point. The extract is a good example of Allende's style of writing and generally of devices of an author to produce a desired effect. It goes through quite a few things that are going on at the time in the novel, while at the same time making for a moving, interesting read where at times we are kept at suspense. It simply stands out in the book, even for the accounts of a character that does not does not play an especially dominant role. In my opinion it is a point at which the writer was very successful in putting the story through the way she wanted it. ...read more.