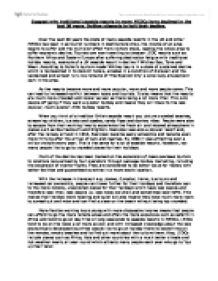 Over the past 30 years the state of many seaside resorts in the UK and other MEDCs has been in as tourist numbers in destinations drop, the income of an area begins to suffer and the multiplier effect from visitors stops, leading the whole area to suffer economic decline. Tourists are now travelling to cheaper LEDC resorts such as Northern Africa and Eastern Europe after suffering destination fatigue with traditional holiday resorts, example of a UK seaside resort in decline if Whitley Bay, Tyne and Wear. According to Butler’s tourism model Whitley bay is in a state of sustained decline which is represented in its derelict hotels, arcades in a condition of disrepair and the vandalised and almost ruin-like remains of ‘The Spanish City’ a once busy amusement park in the area.

As the resorts became more and more popular, more and more people came. This can lead to increased conflict between locals and tourists. It also means that the resorts are much more crowded and noisier as well as there being a lot more litter. This puts people off going if they want a quieter holiday and means they will travel to the less popular, much quieter LEDC holiday resorts.

When you think of a tradition British seaside resort you picture crowded beaches, screaming children, buckets and spades, candy floss and donkey rides. People were able to escape from their working lives to experience the fresh air and relaxed atmosphere in places such as Bournemouth and Brighton. Blackpool was also a popular resort and, after the railway arrived in 1846, Blackpool became easily accessible and became even more thriving after the arrival of cars and coaches. By 1980 it was attracting over a million visitors every year. This is the same for a lot of seaside resorts. However, not many people like to go to crowded places for their holidays.

Much of the decline has been blamed on the expansion of mass overseas tourism to locations popularised by tour operators through package holiday marketing, including the expansion of charter flights. They are considered to be better value for money with better facilities and guaranteed sunshine in a more exotic location.

With the increase in transport e.g. planes, Eurostar, trains, bus tours and increased car ownership, people can travel further for their holidays and therefore look to the more remote, unexplored places for their holidays which have less people and therefore less litter, less people i.e. less noise pollution and sometimes less traffic. This makes their holiday more relaxing and quiet but also means they have much more room to spread out and relax and can find a place on the beach without being too crowded.

More flexible working hours along with more disposable income means that people can afford to go the more remote areas and often the more expensive such as safari’s in Africa and tend to go on day trips or long weekends to seaside resorts in MEDCs. LEDCs tend to be on the news a lot more as well and with increased knowledge about the less economically developed countries people like to go on holiday there to spend time on the remote, empty beaches and to find out more about the culture there. Also, LEDCs include places such as Africa, Asia and other countries with a much better climate and hot weather nearly all year round which attracts many people each year who go to ‘top up their tans’.

There are also more cruise liners around now which means that more people go on cruises to be near the sea rather that to the beach. There is also an increase in urban tourism meaning people travel to the cities rather than to the beach to explore an area’s culture and an increase in eco tourism and leisure tourism with more people travelling to theme parks than to the coast.

Seaside resorts also declined due to activities and industries such as fishing, mineral extraction and shipbuilding also going into decline. And which visitors love the Victorian piers and promenades this is expensive for local authorities to upkeep and they get little commercial return because it’s free to walk down the pier! Flood defence and coastal erosion are also very expensive and mean that the government has little money to spend on the resort itself leaving it to go downhill.

Package holidays, and later budget airlines, provided major competition but the real problem was the seaside resorts were mainly Victorian and after the war they had a huge surge in demand which exceeded supply.

A lot of resorts got complacent and thought the visitors would always come because they had been since the 1870s. The high-earners went overseas in the 60s and the resorts responded by going downmarket and cutting prices, and the spiral of decline began.

One of the towns which endured a typically tough experience was Morecambe in Lancashire. The town fought a losing battle in the 70s when package holidays really took off. Initially Morecambe lost many of its tourist attractions and the guest houses turned into houses of multiple occupation filled with benefits claimants. With less attractions and competition from the likes of Blackpool, by the 90s Morecambe could hardly be called a 'resort' any more. Boarded-up shops, hotels and houses were evident, while petty crime and vandalism became rife and a "B&B ghetto" for people on benefits grew up.

Those problems still exist but thanks to the regeneration initiatives things are changing and people want to live there again and the future looks bright. Morecambe still has thousands of visitors every year and is marketing itself as a place for bird-watching, while many parts of the town have been remodelled through multimillion-pound schemes. While social and economic problems still persist elsewhere, there are reasons for optimism.

In Skegness the daytripping, self-catering and short breaks market is still strong, while efforts are being made to extend the holiday season. And in Rhyl, a £3.8m project called Drift Park, with its five themed gardens and open air theatre, has inhabitants hopeful things are on the up.

These are just some of the things being put in place in order to bring tourists back to the coast. Much more money is being pumped into the coast in order to improve the areas and encourage people back. Many more theme parks are being introduced near the coast and many more hotels and places to stay.

Some resorts have been able to compensate to some extent by expanding and developing other functions such as office and light industry development, expansion of higher education institutions and their growing function as retirement towns. The most successful of these have been coast resorts such as Bournemouth and Brighton which are within easy access of London. Others, such as resorts like Skegness and Scarborough are less accessible and have less potential to attract much alternative growth.

These resorts depend on grant aid and their own initiatives to reverse the decline in tourism. E.g. in 1992 three smaller resorts collaborated with certain other European resorts to establish the ‘restore project’, backed by European Commission money. Experiences have been pooled and ways of regenerating coastal resorts explored. This has been followed up by the Resort Regeneration Pilot Project covering selected resorts such as the small resorts of Redcar and Saltburn on the North Yorkshire Coast and the wider region of the Costa Brava in Spain.

There must be a well thought out strategic plan at local and regional level to cover the long and short term. Regeneration will require extensive refurbishment and infrastructure improvement in the resort itself and additional leisure and recreational activities currently in popular demand such as theme parks, heritage and nature trails. There is greater need to attract more short break visitors.

There is some evidence of resort regeneration. Brighton for example is regarded as having ‘reinvented itself’ by upgrading accommodation and facilities, promoting itself as a centre for market day trips and as a national and international conference centre.

In conjunction with the local authorities, North West Water Authority have undertaken a clean up of the coastal stretch fronting Blackpool, while, with the help of a government grant of £21 million, Blackpool’s local council has undertaken a major refurbishment of the Central Promenade as well as trying to market its traditional character to overseas tourists.

Resorts with little else to offer beyond seaside tourism have tried to highlight their advantages for the traditional family seaside holiday while at the same time updating and widening their image by adding more modern recreational facilities and promoting the ‘green tourism’ and historical attractions of the rural and undeveloped coastal areas around.

While to some extent recent trends would support the view that seaside towns are a national resource and do have a future, given the large number of alternative holiday venues abroad and a continues fall in real costs of overseas travel, the traditional seaside resort is unlikely to regain its former position as a magnet for mass domestic tourism.