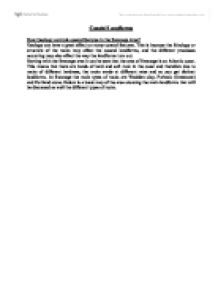 Coastal Landforms How Geology controls coastal features in the Swanage Area? Geology can have a great affect on many coastal features. This is because the lithology or structure of the rocks may affect the coastal landforms, and the different processes occurring may also affect the way the landforms turn out. Starting with the Swanage area it can be seen that the area of Swanage is an Atlantic coast. This means that there are bands of hard and soft rock in the coast and therefore due to rocks of different hardness, the rocks erode at different rates and so you get distinct landforms. At Swanage the main types of rocks are Wealden clay, Purbeck (limestone) and Portland stone. Below is a basic map of the area showing the main landforms that will be discussed as well the different types of rocks. From the map it can be seen how the different layers of rocks are arranged so there are softer rocks in between harder rocks and at Durlston it can be seen that there's peveril point, and Durlston head, which is sticking as well as there being Durlston bay. All these landforms are there even though the whole section of rock is made up of the same type of rocks (limestone). Starting at Studland Bay the rock type over there is mainly sands and gravel, and this type of rock is softer and so it's easier to erode by processes such as hydraulic action or abrasion. ...read more.

Therefore to conclude it can be said that the rock lithology and structure affects the coastal landforms because where you have softer rock more erosion occurs there forming bays and where there's harder rocks you get more pronounced headlands. Due to the differences in Geology you get differing processes, which can form distinct landforms. Starting at Studland Bay you can see that at the South Haven peninsula there's a spit forming. A spit is evidence for longshore drift occurring. The geology controls this process because since the rock type here is made up of sand and gravels when this section is eroded it means that there are loose sand grains and pebbles, which can easily be transported by waves. The fact that the spit is growing northwards is supported by the fact that you have south-easterly winds. In Longshore Drift material is carried up the beach in the swash at the same angle as the wind is blowing and is brought straight back down due to gravity. This zig-zag motion continues carrying material up the bay till its deposited in open water near the South Haven point forming a spit. At the Foreland since its made up of chalk and has several vertical bed outcrops you get the distinct cave, arch and stack sequence, which is when a joint is exposed by hydraulic action, which widens forming a cave and then when two caves meet an arch is formed, which due to undercutting at the foot by abrasion and weathering due to freeze-thaw at the tops breaks down due to its own weight leaving a stack. ...read more.

One last structural factor, which controls the landforms, is that of faults and folding. During the Alpine orogeny (mountain building) period sections of this coastline were affected by faulting. This folding and faulting has caused some distinct coastal patterns in various landforms. For example at Stair Hole there are clear examples of rippling on the rocks. In and around the Lulworth Cove the land there has been so severely folded that the beds there are completely vertical. This folding has affected the Purbeck stone as it is weaker while it hasn't really touched the Portland due to its strength. The numerous folds inside the Purbeck stone means that it has a lot more cracks and joints of weakness, which have been exposed by hydraulic action leading to the Purbeck stone being eroded contributing to the production of features such as Lulworth Cove Durdle Bay. Therefore it can be seen that variations in lithology and structure have really affected the coastline at Lulworth. These variations in turn have affected the processes, which create the distinct landforms. To conclude overall the lithology and structure of Swanage and Lulworth has controlled the formation of the various coastal features due to there being different strength sand types of rocks in different positions forming spectacular landforms. These differences in strength and rock type have allowed certain varying process to occur in different places allowing different landforms like caves, arches and stacks, or coves to be formed in different places. ...read more.