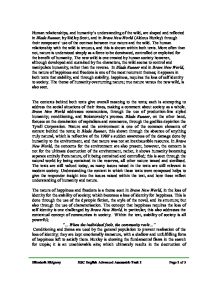 Human relationships, and humanity's understanding of the wild, are shaped and reflected in Blade Runner, by Ridley Scott, and in Brave New World (Aldous Huxley) through their composers' use of the contrast between true nature and the wild. The human relationship with the wild is tenuous, and this is shown within both texts. More often than not, nature is understood simply as a force to be dominated, controlled or exploited for the benefit of humanity. The new wild is one created by human society however, although developed and sustained by the characters, the wild seems to control and manipulate humanity, rather than the reverse. In Blade Runner and in Brave New World, the nature of happiness and freedom is one of the most recurrent themes; it appears in both texts that stability, and through stability, happiness, requires the loss of self identity to society. The theme of humanity overturning nature; true nature versus the new wild, is also seen. The contexts behind both texts give overall meaning to the texts; each is attempting to address the social situations of their times, making a comment about society as a whole. Brave New World addresses communism, through the use of production-line styled humanity; conditioning, and Bokanovsky's process. ...read more.

The dystopic impression of futility upon the respondent is created here, as it also is in Blade Runner. Blade Runner is founded in a world where identity is forfeited to society without even the illusional happiness of Brave New World. It is without true freedom or happiness, which is shown through the use of film noir; the darkness of the film's themes and issues is reflected in the use of cinematic technique, the dim lighting and stylised settings .The assimilation of humanity by the replicants shows the theme; they have given up their own identity in the hope of attaining happiness. In contrast to this, the discovery by Rachael of her true identity, a replicant, destroys the illusion of happiness her place in society had given her; Rachael: "I'm not in the business. ...I am the business." But this allowed her to discover a semblance of freedom. The failure of the replicants to truly become a part of human society is that they are too much a part of the new wild, perfect in the face of humanity's flaws, and so are separate from true nature and humanity... In Brave New World, true nature is constrained and separate from society; the new wild is humanity's creation; here, Savage has been rejected from the natural in the reserves, but Savage cannot cope with the demands ...read more.

It has become apparent in the completion of this unit; that the most effective of study processes have not been those which were technology based. When using the mind-mapping program, Inspiration, the gain was worth less than the effort taken. The two texts, Blade Runner and Brave New World both present different, but unopposed views of humanity and its relationship with the wild. This has been done through the use of techniques including dystopic fiction, film noir, and characterisation. Also shaping and reflecting human understanding were the themes of the nature of freedom and happiness, and of humanity overcoming nature. It can be seen in the texts that the view of humanity reflected is one of the misuse of technology and society. Technology creates the new wild, and develops a dystopia, which slowly strangles humanity's relationship with the natural world, leaving the characters to be destroyed by their own creation. Both texts show a world decimated by technology, bereft of true nature, and therefore of true humanity. What is left to the characters is a self-made wild; a thing more dangerous than ever true nature was; for the wild manipulates and distorts the characters whenever they come into contact with it, without being affected itself. Elizabeth Ridgway HSC English Advanced Assessable Task 2 Page 2 of 3 Elizabeth Ridgway HSC English Advanced Assessable Task 2 Page 1 of 3 ...read more.