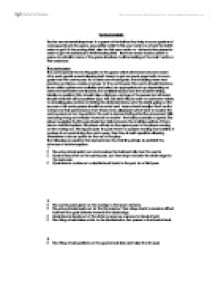 Tatical analysis - Tactics are extremely important in a game of Netball as they help to score goals and consequently win the game.

Tactical analysis Tactics are extremely important in a game of Netball as they help to score goals and consequently win the game. My position which is WA uses tactics to attack the ball in order to get it in the scoring third, also the WA uses tactics to defend other players in order to get the ball back to their shooting third. There are many tactics used in a game of netball in many of the game situations, I will be looking at the main tactics a WA would use. The centre pass The centre pass is the starting point of the game which alternates between teams after each goal is scored allowing both teams to get an equal opportunity to score goals from the centre pass. To try and score these goals, the attacking team must practice and know a series of setups for the centre pass. The centre should therefore know which options are available and select an appropriate set up depending on where the defenders are situated, the available space and the receivers timing. Ideally my position (WA) should take a high percentage of the passes but all teams should work with all four positions (GA, WA, GD AND WD) in order to add some variety to attacking play and by not letting the defenders know who the ball is going to. ...read more.

There may be some circumstances in a game where the WA and GA need to apply additional tactics on the transverse line in order to free themselves from their opponent. The GA or WA may either use a screen or an interchange position in order to outwit their opponents and receive the ball successfully. The screen 1- * The WA uses the GA side as a screen and receives the first pass * The GA moves over the transverse line, but then quickly drops back to receive the second pass from the WA * The GS has moved to the top of the circles but drops back to receive a pass from the GA 2- * The goal defense can also screen for the wing defense * The wing attack and goal attack both bring their defense forwards and then drop back. * The wing attack receives the second pass on the strait line * The goal shooter then receives the 3rd pass. The interchange 1- * Here the GA and WA set up in a stack position on the transverse line * The WA interchanges space and split with the WA in order to receive the centre pass * The GS offers a straight line pass for the 2nd pass. * If the goal shooter is not free, the ball could be thrown back to C on a double play * The ...read more.

* Goal shooter then should receive the ball leading towards the post * Goal defense should be used as back up if the forward options are not possible. * Another option for the third pass is to throw to the C at the edge of the circle. A sideline throw in from the attacking third * Wing attack passes the ball to Centre who darts to the circle edge * The pass could go to the goal shooter, with the centre placing herself at the top of the circle edge * Wing defense provides the back up for Wing attack * Goal shooter receives the second pass on a short passing option * Goal attack could receive the third pass under the post depending on the position of the defender. Or * Wing attack passes to wing defense and executes a double play to take the ball to the edge of the circle * Goal attack and goal shooter are both in the circle and the goal attack rotates and clears to allow the Goal shooter to receive the ball. These side line pass tactics are extremely important for my position (WA) as I play a dominant role in these passes, sometimes passing the ball, receiving the ball or being back up. Therefore it's important for me to know the tactics involved to prevent a mess up in the tactic and to allow it to go smoothly without any interceptions or mistakes. ?? ?? ?? ?? ...read more.