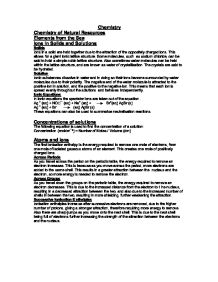 Chemistry notes - Chemistry of Natural Resources, Elements from the Sea, Ions in Solids and Solutions

Chemistry Chemistry of Natural Resources Elements from the Sea Ions in Solids and Solutions Solids Ions in a solid are held together due to the attraction of the oppositely charged ions. This allows for a giant ionic lattice structure. Some molecules, such as sodium chloride, can be said to hold a simple cubic lattice structure. Also sometimes water molecules can be held within the lattice structure, and are known as water of crystallisation. The crystals are said to be hydrated. Solution Ionic substances dissolve in water and in doing so their ions become surrounded by water molecules due to their polarity. The negative end of the water molecule is attracted to the positive ion in solution, and the positive to the negative ion. This means that each ion is spread evenly throughout the solutions and behaves independently. Ionic Equations In ionic equations the spectator ions are taken out of the equation. Ag + (aq) + NO3� (aq) + Na+ (aq) + Br+(aq) AgBr (s) Ag + (aq) + Br- (aq) AgBr (s) These equations can also be used to summarise neutralisation reactions. Concentrations of solutions The following equation is used to find the concentration of a solution: Concentration (moldm��) = Number of Moles / Volume (dm) Atoms and Ions The first ionisation enthalpy is the energy required to remove one mole of electrons, from one mole of isolated gaseous atoms of an element. ...read more.

For example 2Na + Cl2 2NaCl Can be written as 2Na 2Na + 2e And Cl2 2Cl + 2e. In these types of reactions, the atoms that cause the other to be oxidised, meaning they themselves become reduced, are said to be called the oxidising agent. The same is said for the atoms that cause the other to be reduced, meaning they themselves become oxidised, which are called reducing agents. Halogens Physical Properties Fluorine Chlorine Bromine Iodine Appearance and State at Room Temperature Pale yellow gas Green gas Dark red liquid Shiny black solid Volatility Gas Gas Liquid, quickly forms brown gas upon warming Sublimes upon warming to give purple vapour Solubility in Water Reacts Slightly soluble to give pale green solution Slightly soluble to give red-brown solution Barely soluble giving brown solution Solubility in Organic Solvents Soluble Soluble to give a pale green solution Soluble to give red solution Soluble to give a violet solution Chemical Properties Fluorine Chlorine Bromine Iodine Relative Reactivity Decreasingly reactive Halide Ions and Silver Ions White precipitate Cream precipitate Yellow precipitate Redox Reactions Weakening oxidising agent Electrolysis When a current is passed through NaCl, the Cl- ions become oxidised producing Chlorine gas at the anode. 2Cl Cl2 + 2e- Storage and Transport Due to its reactivity Fluorine cannot be stored, and so it is mad ein situ by electrolysing hydrogen fluoride. ...read more.

Permanent Dipole to Induced Dipole When molecules with permanent dipoles are mixed with molecules that have not dipoles, their polarity of their bonds induces a polar bond in the other atom or molecule. This results in a fairly strong bond. Instantaneous Dipole to Induced Dipole These are the weakest of the intermolecular bonds. The constant movement of electrons creates an instantaneous dipole in an atom or molecule, and this induces another dipole to form in another atom or molecule. Due to the continuous movement of these electrons, there is a continuous forming and breaking interaction between dipoles. The greater the number of electrons, the greater the strength of the bond. Halogenoalkanes These are alkanes with one or more of the hydrogen atoms being substituted by a halogens. Physical properties The more halogen atoms in the Halogenoalkanes, and the heavier the halogens bonded to them, the higher the boiling point of the halogenoalkane. This is due to the increase in number of electrons due to the number, or size of the halogens bonding to the alkenes, therefore increasing the number of electrons, and increasing the strength of the instantaneous dipoles. Also the bond enthalpies decrease as you go down the group. This is due to the increasing size of the halogen, meaning that there's less attraction to the nucleus, and more shielding. Homolytic fission This forms radicals. It must occur when the element is in a gaseous state, and in the presence of UV radiation. R-Cl R + Cl ...read more.